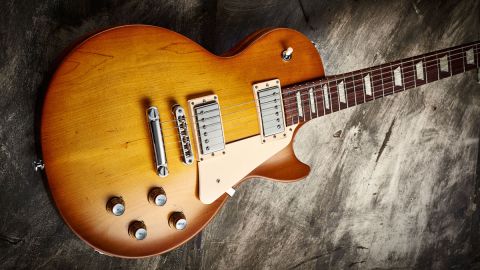 A great guitar and an even greater price.

It wasn’t long ago that Les Paul Studios were the most affordable line in the range, giving guitarists that classic mahogany body/maple cap and double humbucker tone without any need for re-mortgaging their homes.

Now with this year’s models creeping up to the £1,300 mark, it’s the revamped Tribute series that is now serving those in pursuit of quality, American-made instruments on a more wallet-friendly budget.

At first glance, not a whole lot seems different compared to the older Standards although the cut of the body feels marginally thinner. Unlike the Les Paul Faded, which sits at a similar entry-level Gibson price point, this guitar has no weight relief whatsoever - effectively paying ‘tribute’ to the chunky blocks of wood that the brand built its name on, though in this case without being overwhelmingly heavy.

The Faded Honeyburst and Gold Top colour schemes in satin finish, along with acrylic trapezoid inlays, gold/silver top hat controls and vintage keystone tuners, also do well in harking back to the timeless looks of the Gibson glory years. Following the news of the Memphis factory’s sale late last year after reports of mounting debts and declining sales, this is something the wider world could do with being reminded of.

Despite all its attempts to update their solid bodies with robotic tuners, neon colours and floating bridges in recent years, the public vote through sales has been fairly unanimous: it’s the classic features that remain the main selling point for any instrument emblazoned with the company’s logo. After all, why change a winning formula?

Of course, not all change need be unnecessary. Sweetening the deal with the Tribute 2018 is the availability of all models in left-handed for the exact same price and cryogenically-treated frets across the entire Gibson 2018 catalogue, topped off by all-new brown leather gig bags that are equally as sturdy as they are pleasing on the eye. Utilising the same pickup combination found in most Customs, a 490 in the neck and slightly hotter 498 by the bridge, the Tribute can cover a lot of tonal ground - from warm blues and woolly jazz to heavy rock, though it naturally falls short on country spank, like any guitar lacking the glassiness of single coils.

Dialling down the tone while on the rhythm setting invites even thicker sounds, reminiscent of the creamy leads made famous by Slash or Gary Moore. The treble pickup offers a lot more grit - suitable for everything from jangly indie-rock chords to full-blown heavy metal worship - and most impressively of all, cleans up incredibly well at around 3 on the volume dial.

With low action out of the box and set up with light gauge strings running across its slim taper neck, the Tribute is easy to pick up and play - an ideal purchase, then, for newer players looking to get their second or third instrument.

Having said that, we found for more professional situations, it falls slightly short on tuning stability. The guitar doesn’t ‘lock’ itself into a tuning quite as naturally as higher-end or vintage Les Pauls, which often sit at the top of the list of dependable workhorses for recording or touring musicians because of their reliable and rugged resistance.

As far as compromises go, it’s not a bad one - once settled into a tighter setup with heavier gauge strings, the issue could be perfectly manageable or even completely eradicated. Truth be told, the mahogany, maple and rosewood won’t be the finest lying around in the Gibson factory, but it’s good enough to bear the stamp and, most importantly of all, it sounds the part, too.

The Faded Honeyburst’s plain top gives the instrument a simple elegance that’s much more modest than the high-end quilts and flames, while the Gold Top screams vintage class - neither giving any indication of their lower price point. If the Tribute’s main goal is to offer players a taste of Gibson’s greatest legacy and access to sounds at the heart of many a classic recording - at a fraction of the cost - then it’s undoubtedly a resounding success.