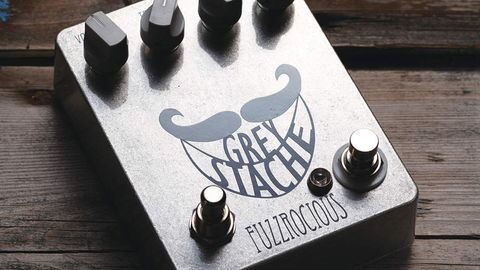 One of the most usable – and fun – Muff variants we've played in some time.

Intended for use on both bass and guitar, the Grey Stache has been modelled on both the so-called Civil War-era Big Muff as well as the General Guitar Gadgets modded version, which was itself based on the Violet Ram’s Head Muff and the 3rd late 1970s version of the pedal.

This modded version also adds a momentary feedback footswitch for madcap oscillation sounds because, well, why not? There are your standard three Big Muff controls as a result, volume, tone and sustain, but there’s also a mids control and a three-way toggle switch to switch between different diodes and shift the mid response of the pedal.

Normally, a Big Muff is characterised by a mid-scoop, and the three-way alternately scoops them further, flattens them, or boosts them, for a more in-your-face, distortion-like tone. For stoner and doom riffing, the scoop simply can’t be beat, nevertheless, it has to be said, with the sustain jammed all the way up and the mids control just above noon, the mid-boost mode sees the Grey Stache pulling double-duty as a pretty ace distortion pedal.

The Grey Stache handles palm-muting surprisingly well, and doesn’t muddy up in lower tunings down to C - a tuning in which Muff fuzzes tend to get excessively dark. Although Fuzzrocious led the charge in terms of modern boutique manufacturers, the market has been somewhat saturated in terms of boutique drives, and now we find that we’re spoiled for choice.

Cheaper handmade Muffs are available, but the Grey Stache’s fantastic sounds and clean, tidy build make it well worth investigating.