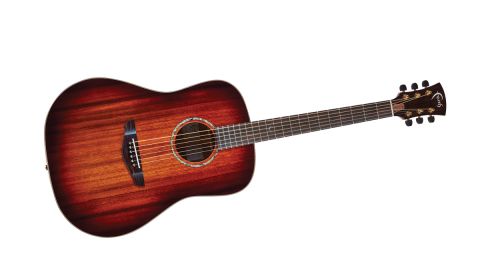 A fine addition to a genuinely exciting range of guitars - but try them all first.

When you’ve got a good thing going, keep running with it.

It’s a rule that has served the guitar world well over the decades - can you imagine if Martin had only ever made one guitar in its all-mahogany 15 Series, or if Fender made just one Strat and then left it at that for the rest of time? Let’s just say the news section in your favourite guitar rag would be a little thin on the ground, shall we?

So expansion is the name of the game, then - and when Faith launched the sumptuous Blood Moon Venus model last year it was met with universal acclaim, eventually winning itself a few awards thanks in no small part to the wonderfully unique choice of highly figured Javanese trembesi as a tonewood.

Fast forward to 2017 and we’ve now got a trio of body styles to choose from, with the dreadnought-shaped Saturn and the baby-jumbo stylings of the Neptune joining the fray. And so, with the original Blood Moon Venus proving a sonic delight in every respect, we were excited to see how these rather lovely tonewoods would work with a dreadnought body style.

With legendary British luthier Patrick James Eggle lending his expertise to the brand, Faith’s guitars have always featured impeccable build quality that pays as much attention to the smallest details as much as it does to the biggest headline features, and that’s very much the case here too. The big story is, of course, the aforementioned solid Javanese trembesi that has been used for the top, back and sides of the instrument - a spectacular-looking tonewood.

The smoky ‘Blood Moon’ burst finish works wonderfully with the smooth gloss finish, bringing out the very best of the grain and figuring of the wood, and is also set off by solid flamed maple binding and abalone rosette. There’s always a risk that woods like these will look a little too showy, but we don’t think many people will consider that to be the case here - everything is very tastefully done and sits just on the right side of flashy.

Elsewhere on the body, the bridge and its pins are all made from Macassan figured ebony, with a row of abalone dots also gracing the tops of the pins. Internally the Saturn features Patrick James Eggle’s X-brace design bracing (made from quarter-sawn spruce), and the woodwork here is, as always, spotless in every way.

Eggle’s influence can also be seen at the base of the bolt on mahogany neck, which is another in-house design of his. The neck is finished in satin for a smooth and comfortable playing experience, and is topped by a Macassan figured ebony fingerboard, inlaid only with the always-elegant Faith ‘F’ on the 12th fret.

Grover rotomatic tuners keep the strings in tune nicely and provide an effortlessly smooth operation, while the nut and saddle are both made from TUSQ.

A quality hardcase is included for the price, but one big omission when you compare the Saturn to the Neptune and older Venus model is a lack of electronics package. The former comes equipped with a Fishman INK/Sonicore setup, while the latter sports a Shadow Performer/Nanoflex configuration.

The dreadnought is a little cheaper as a result, but the lack of an option might be frustrating to those that want the versatility of an electro coupled with the tones of a dreadnought. Not only that, but it makes the decision to offer two straplocks a little bit puzzling. Playability-wise the Saturn is every bit as wonderful as you’d hope.

The guitar feels balanced and comfortable on the lap, the frets are smooth and well-fitted, and the 16” radius neck feels good in the hand for any style of playing. Coupled with the high quality build and stunning good looks, it really does make for an enticing package, which leads us nicely onto the tonal performance.

Grabbing your favourite plectrum and digging in for those first few tentative open chords is a joyous experience with the Blood Moon Saturn. Faith describes the tone of the Javanese trembesi as being similar to Koa, offering the warmth and body of mahogany with just a touch of rosewood finesse added into the mix.

For all the marketing guff that you often hear from guitar makers about their instruments’ tones, in this case it turns out to be a very accurate description. There is an unmistakable push from the mids that feels so earth rattling against your ribcage that it almost has a physical, tangible quality to it. It thuds and pops with definition and soul, but where all-mahogany instruments can get a little stuck in their tonal niche, the Saturn offers a touch more high-end sparkle and low-end clarity, in a very similar way to a spruce/rosewood combo.

What you get is a guitar that covers a very broad tonal spectrum right from the off - it’s the definition of ‘room-filling’ and it’s got a lovely natural taper to the notes that just begs you to let them ring out. Another benefit of this expanded tonal spectrum is that fingerstyle sounds a lot more pronounced and characterful than it would on your average dreadnought (certainly a spruce-topped one, at any rate).

However, that’s not to say the guitar doesn’t still sound like a dread - it does - and as such, fingerstyle purists and those that adopt a mix of styles will still probably find they get better results from the other body shapes offered in the range.

We’re faced with a dilemma with the Blood Moon Saturn. As a purely acoustic dreadnought it’s a delight - offering a lovely set of tones that expand slightly over your average dreadnought and give strummers a lovely canvas to work with. From that point of view alone there’s little to criticise and if that’s the type of guitar you’re after you can probably add that elusive final star to this review.

However, when compared with the other guitars in the Blood Moon stable, the Saturn feels like it’s holding something back by lacking an electro option. Not only that, but for any player that has even the slightest interest in fingerstyle, the other guitars in the range also offer a slightly more dynamic set of tones that can more easily be adapted to multiple styles.

The Saturn remains a wonderful instrument - a joy to play and to listen to - but if you’re shopping in this kind of price range we suspect that there will be some of you that would happily spend a little extra to get the increased versatility offered by the alternative models. For that reason, we’d suggest trying the entire lineup to find the right one for your playing style. Whichever you choose, you’ll be taking home a very special instrument indeed.