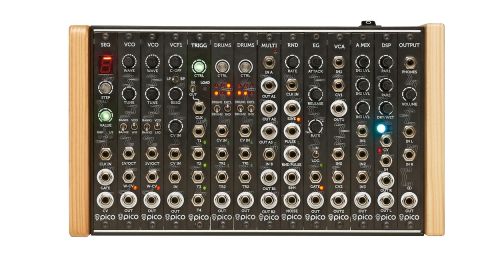 A fantastic-sounding starter system that is begging to be expanded.

Latvian company Erica Synths started out in 2014 with a DIY Eurorack version of the classic Soviet Polivoks synth and it now boasts an impressive line-up of products that seem to be constantly revised and updated.

This year it shocked the Eurorack world by releasing the whole Pico range at one go - 20 modules in all! With this new Pico System, Erica Synths has brought together 14 of these modules in a 42HP sturdy metal case about the size of a lunch box.

Although tiny, the Pico system is well laid-out with the majority of the jacks at the bottom, leaving the knobs and switches accessible even when fully patched. The pots are not bolted to the panels but taking out a few of the modules shows that the circuit boards are firmly attached with stand-offs making the pots feel sturdy and solid - no wobbles.

Both the Sequencers and the Drum modules feature glowing encoders which change colour or flash to show which parameter you are currently editing. This works well in practice and enables lots of options in a small format.

The DSP (Digital Signal Processing) module is a reduction of Erica’s Blackhole DSP module and offers several great-sounding Reverb and Delay modes, a very usable distortion/bitcrusher, along with a Leslie rotating speaker emulation (although a chorus would have been more useful). It also features stereo outputs which is great for a module of this size.

The effects really make the system shine - electronic sounds on their own can sound dry due to their lack of natural reverberation, but the delays and reverb on offer here make the oscillators come alive.

For our first play with the system we didn’t consult the manual and got stuck in straightaway. It’s intuitive with only the CV Sequencer’s options posing a problem; fortunately the sequencer has a random button which generates some useful patterns immediately.

A quick read of the SEQ CV Sequencers online manual reveals its depth - sequences can be any length up to 16 steps. You can program slides, rests and legato notes, and the sequencer modes are the standard: forwards/backwards, pendulum or random.

The output is quantised and there are nine scales available; you can switch the octave range between 1-8V.

The VCO modules are identical, each featuring two banks of waveforms selectable by a knob at the top or by a CV input. The first bank are sampled classic synth waveforms, and the second bank features more complex digital waves ending in digital noise.

One knob is used to tune the oscillator by semitones - on the The VCO modules are identical, each featuring two banks of waveforms selectable by a knob at the top or by a CV input. The first bank are sampled classic synth waveforms, and the second bank features more complex digital waves ending in digital noise.

One knob is used to tune the oscillator by semitones - on the The filter is apparently modelled on the Polivoks but to me it lacks the character and growl of that classic. There is just one CV input with an attenuator to control the cutoff.

Next up is the TRIGG sequencer - with four outputs this would generally be used to trigger the drum modules; it can clock itself or be sync’d to an external clock.

Patterns are loaded into memory from a simple web-app. We used our phone to quickly knock up some beats; upload takes only a second. Again this is very well-implemented. The pattern length for each channel can be different, making euclidean patterns possible for more variety than the standard 16 step 4/4.

The two DRUMS modules are also identical. Each features two trigger inputs and a single output, and 64 samples are available. These are selected with the top encoder and you can also alter the sample pitch, decay time and volume. A CV input allows control of one of these parameters for the first drum output.

The RND module takes a clock and produces sync’d sine and pulse LFOs. Along with a random pulse and Sample & Hold, a noise output is also available. The dual VCA is basic and performs well.

When we reach A MIX, the audio mixer, we begin to encounter problems. The mixer has only three inputs, so you can’t mix the two oscillators and play all four drums at the same time. Two audio mixer modules would have provided greater flexibility as one could be used to mix the two VCOs and noise, with the second as an output mixer to combine the drums and the synth voice.

Another issue is that the EG module has only one envelope generator. To our mind a minimum of two is essential for even a basic synth and with a bit of redesign we think two could certainly fit into a 3HP module.

With only one envelope you can control the VCA but you have to use the RND sine or square to open the filter which is limiting. We found myself using an external ADSR to get satisfactory results.

If we owned this system, the first thing we would do would be to remove the MULTI and put another EG in its place. A passive signal splitter would work just as well without taking up any case space.

As a portable modular starter system Pico definitely fits the bill. However with limited control and CV inputs it won’t be long before you’re heading out for more modules.