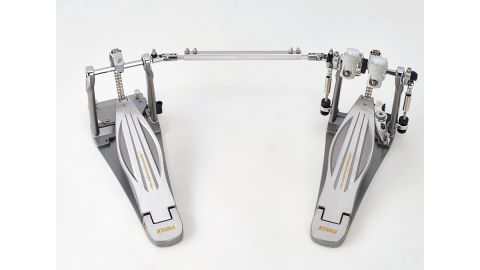 Tama has once again excelled itself with the upgraded Cobra family.

The industry-staple Iron Cobra pedal has undergone many a tweak in its 25 years and even spawned an offshoot - the Speed Cobra.

For 2016 both the Iron and Speed Cobras have been given an update, but how will the latter fare?

At a glance, one could be forgiven for assuming that there is nothing particularly new and noteworthy on the new Speed Cobra pedal. The truth is though, as ever there are a host of improved features on board the brand new pedal.

It is possible to see a couple of design embellishments between the Iron and Speed Cobras in the form of a little red trim (Iron Cobra) or gold trim (Speed Cobra) on the beater and in the heel plate.

The latter isn't just for decoration though and actually makes up half of the new two-part bearing hinge system. Designed to allow the pedal board to move more freely, the hinge has also been set back a little further than its predecessor which makes the pedal a little longer.

The width of the pedal has also been modified with the aim of completely eliminating any chance of side to side movement. The whole frame has been widened by 15mm from the previous model, along with 12mm in the baseplate.

The first thing to catch your eye with the new model will likely be the new beater design. The beater faces have a considerably smaller diameter than a regular sized beater (the size of 10p piece) yet are a lot deeper.

The Speed Cobra's Accu-Strike beater is almost identical to the Iron Cobra's Power-Strike version, except it uses a translucent Butadiene rubber which the company claims "offers strong resistance to wear, is lighter weight and provides consistent and articulate sound with strong attack.

The sound is fat yet focused even at lower volumes". As ever with Iron and Speed Cobra beaters, the angle of the face is adjustable to ensure a square contact on the drum head. The mechanism that attaches the pedal to the hoop has been completely overhauled (again for both pedals) which adds further support and stability to the pedal.

The 'Para Clamp II Pro' has the ability to pivot quite freely in position which should help get a good fit from almost any angle using less pressure. It also has a much thicker coating of rubber which reduces, if not completely eliminates, marring.

Saving the best until last, the real magic that takes place in the mechanical department has to be the innovative swivel spring. This feature allows the bottom of the spring to move back and forward in a pendulum-type fashion as the cam moves at its top.

This means that the spring is always completely in-line with itself, resulting in less wasted energy and 'turbulence'. Tama claims that this will make the pedal smoother and result in an improved stroke.

For review we have a double Speed Cobra. Without a shadow of a doubt, this pedal is impossible to fault.

Unsurprisingly, the Speed Cobra has a lighter feel to the Iron Cobra which is especially useful for double-kick playing. This pedal is a joy to play and lives up to its name with no difficulty.

Simply put, it just did its job, as it was told. Genuinely improving our bass drum playing at the same time.

The sound of the new beaters is definitely worth checking out for yourself. The punch they bring to the table is simply immense, especially considering the size.