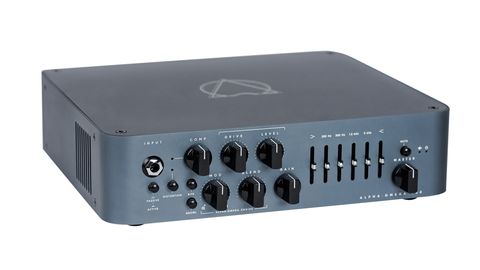 Sometimes it’s easy to forget that Darkglass is a relative newcomer to the world of bass amplification.

Launched in 2009 by founder/designer Douglas Castro, the company quickly built a solid reputation among the low-end  community, through the success of pedals such as the Microtubes B3K distortion. Other well-received pedals followed, including the Microtubes B7K Ultra and Hyper Luminal Compressor, each one acclaimed for its high-end aesthetics and superior tone.

The company’s first bass amplifier - the Microtubes 900 - was launched in 2016 and was followed by a 500W version a year later. It’s no surprise that in less than a decade, Darkglass’s stellar line-up of products has resulted in an enviable artist roster which includes old hands such as Tony Levin and Dave LaRue, session veterans such as Chris Chaney and Tim Lefebvre and contemporary low-enders such as Adam ‘Nolly’ Getgood (Periphery), Conner Green (Haken) and Amos Williams (Tesseract).

Under the microscope here are the company’s latest offerings: the Microtubes v2 - an update of their original 900W bass head - and the Alpha Omega 900, a new amplifier which incorporates the Alpha Omega distortion engine from the pedal of the same name.

It’s not often that we talk about packaging in a review, but it feels necessary in this case. Each amplifier ships in a rigid cardboard box emblazoned with an embossed Darkglass logo and with a removable outer sleeve. The interior has sculpted internal compartments for the amplifier, footswitch and cables: the overall impression is very much that of a high-end product. The result of this first-rate packaging is most importantly that the product is kept safe whilst in transit, but it also offers the user a premium ‘unboxing’ experience.

Out of the box, each of these amplifiers sports a gorgeous brushed aluminium finish, adorned with black rotary controls and illuminated sliders for the six-band graphic EQ. All of the controls move with the satisfying stiffness that you would expect from a high-end product. Each amplifier is accompanied by a colour-matched footswitch which boasts the same design aesthetic, topped with a simple push button control that allows the user to both engage the distortion engine or mute the amplifier.

The front faces of each unit offer a similar set of controls, albeit arranged in an unconventional sequence: the input stage on each unit is followed by the distortion engine, which in turn is followed by the ‘clean’ part of the sound, the EQ section. The benefit of placing the distortion engine in front of the EQ is that this latter feature can be used for further refinement of the distorted tone. In practice, it took me a minute or two to get used to this, after which it felt routine.

Plugging first into the Microtubes v2, we initially left the Microtubes circuit switched off in order to first investigate the clean tone. With the distortion element out of the picture, the amp acts in the same way as you would expect: appropriate input and output levels can be set with the gain and master controls, compression can be added via its own control, and the tone can be tweaked to suit via the six-band EQ. With everything set flat, the resulting sound was a faithful, uncoloured representation of the instrument’s natural sound. Turning to the EQ section, it quickly became clear that only very minimal adjustments were needed for noticeable differences in tone. The EQ has the expected bass and treble sliders, with sliders for four midrange frequencies sitting in between, each with adjustment levels of +/-12dB.

Switching in the Microtubes Engine adds a significant number of additional tone-shaping opportunities. There are four controls to work with here: Drive, Tone, Level and Blend. The amount of distortion is adjusted through the Drive control, while the Level control adjusts the output of the Microtubes Engine. Blend allows the user to mix between the clean and distorted signals, and Tone makes significant changes to the sound through the use of a variable low pass filter: at the lower end of the tone spectrum the distorted tone is smoother and warmer, becoming more aggressive as you turn.

The Microtubes also has a push button that switches between two overdrive voicings: B3K is more aggressive, while VMT is warmer. The colour of the LEDs on the graphic changes colour to indicate which is in use: red for VMT, blue for B3K - a nice touch. During testing we found the warmth of the VMT perfect for adding a subtle edge to a predominantly clean tone, while the B3K was great for more aggressive, driving plectrum lines. Overall, the Microtubes Engine offers exceptional levels of control over the distorted sound and this, combined with the clear, natural clean tone ensures that the Microtubes v2 delivers the sonic goods where needed.

The clean element of the Alpha Omega 900 operates in the same way as the Microtubes, but the distortion engine is this time based on the popular Alpha Omega preamp which boasts two blendable distortion circuits, Alpha and Omega. The Drive and Level controls function as on the Microtubes v2, with the Mod control allowing the user to blend between the two distortion circuits. The accompanying literature describes the Alpha circuit as ‘punchy, tight and with lots of definition’ and the Omega as ‘brutal and raw’, both accurate representations. We found the warm drive of the Alpha circuit perfect for sitting in a mix without overpowering, whereas the Omega was better suited to wild, unrestrained moments of aggression. Further tweaking of each is possible via the Bite and Growl push buttons: Bite boosts high mids and Growl is a shelving bass boost.

The rear panel for each amplifier is identical. Alongside the usual and expected connection ports, we were pleased to see a headphone output with a dedicated level control, and an aux-in connection. The inclusion of these oft-neglected features means that it’s easy to play along with audio tracks, making these amplifiers perfect for home practice as well as live work. There are also pre and post DI outputs and a MIDI input which allows the user to control the channels of the amp with a standard MIDI controller.

A USB port enables connection to the downloadable Darkglass Suite software, through which it’s possible to load impulse response cabinet emulation patches. Three different cabinet emulation patches can also be selected on the rear of the unit using a selector switch. Overall these amplifiers are exceptionally well-appointed - nothing has been left out.

At this price point, the Microtubes v2 and Alpha Omega 900 are not casual purchases, but the superior tonal options on offer are enough on their own to make these very competitive at the upper end of the market. Couple those killer tones with an enviable set of features catering for every conceivable need, and you have some seriously envy-inducing product. The Alpha Omega’s forthright sound will likely find its biggest audience among the metal/progressive element of the low-end community, but both amplifiers are versatile enough that they should be very high on the shopping lists of bassists from all walks of life.