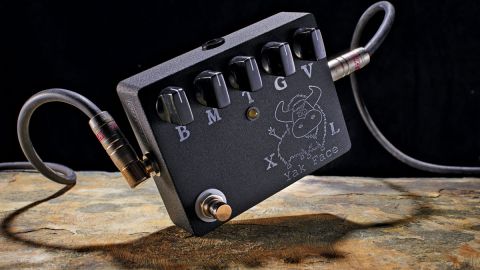 If you are looking to add some vintage Fender blackface flavour to your pedalboard, this will definitely get you into the zone.

With so many pedals coming in from across the globe, let’s not forget the great UK-based pedal manufacturers too.

One such maker is Bigfoot Engineering: a company founded by pedal designer and builder Rhys Stubbs in 2009. The company’s pedals are all-analogue and hand-built to order.

We’ve taken a look at several of the company’s wares before, including the Thunder Pup, an overdrive pedal with a British flavour inspired by AC/DC’s Young brothers. Its latest, though, takes its inspiration from over the pond: the Yak Face XL combines overdrive and EQ and has been designed to deliver the sound of a classic ‘Blackface’ Fender amp.

Two other Bigfoot pedals are part of the family: the Yak Face Mini and the Yak Face (2-band and 3-band EQ, respectively). The XL features the 3-band EQ, (vintage-style passive EQ inspired by equalisers found on larger Blackface Fender amplifiers, the Super Reverb and Twin Reverb), and partners Bass, Middle and Treble knobs with a gain stage-equipped with Gain and Volume knobs.

With the Gain turned right down and the tone knobs at neutral settings, stepping on the footswitch takes you into typical blackface tonal territory of a scooped midrange and glassy top end - essentially a classic clean Fender sound.

Advance the Gain knob and you’ll travel through all the nuanced stages of amp break-up with very natural shaping of the sound available via the tone knobs; Bass adding a deep warmth, Treble governing the sparkle factor, adding extra crispness to the crunchier sounds, and Mid having the ability to bring the sound more ‘forward’.

With the Gain up full it’s the sound of a classy vintage Fender with glowing valves - raunchy with clarity rather than saturated, and feeling dynamically responsive under your fingertips.

If you are looking to add some vintage Fender blackface flavour to your pedalboard, this will definitely get you into the zone. While it could be described as (and used as) an overdrive or an ‘amp-in-a-box’ pedal, we see it as a tonal enhancer with optional degrees of dirt.