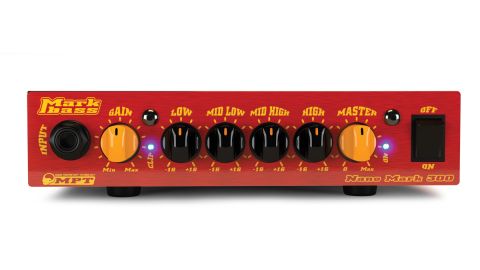 Classic signature Markbass tone in a super-compact and simple to use package. Plug in and play!

It's easy to see why Markbass, now in business for almost 16 years,  has been so successful.

It has consistently produced distinctive, top-notch amps, speakers and accessories of a quality that makes them attractive to some of the best musicians in the world, while selling them at a reasonable price.

Markbass has often preferred a 'slow-cook' development policy for its amp heads and products such as the superb Little Mark amp have been around since the company's foundation.

One such product that was available until quite recently was the F1 amp. This was a single unit, ultra-compact bass head with a 500W digital amp and back-to-basics preamp. These amps slipped under the radar for many bass players, and in some respects were ahead of their time.

But for those in the know, they were highly prized and still change hands for top dollar. The new Nano 300 has lots in common with the F1 and F500, not least the richly detailed mid range and astonishing power - it's hard to imagine how such a tiny amp can produce so much volume.

Like the F1 amp, a feature of the new Nano amp is its simple control layout. There's a Gain and Master volume and a four-band EQ section (Low, Mid Low, Mid Hi, Hi). This is pretty much the same as that on most Markbass heads, with plus or minus 16 dB of gain available for each well-chosen frequency.

These two controls allow you to quickly add your own distinctive character to the sound and many players, myself included, set the EQ flat and just use the VPF and VLE controls to shape their sound as they wish. You can get something like the same sounds by carefully adjusting the EQ, but it's a longer process.

It's good to see that the back of the Nano features a pro-spec Speakon out plus a standard mains input rather than a separate PSU. You also get an effects send and return and a tuner out. Also welcome is a balanced XLR DI output with a Pre/Post EQ switch and a ground lift button. It's a shame there's no headphone socket, and a mini-jack Aux In would also be a very useful addition to an amp that would be perfect for practice and rehearsal.

Hooking the Nano up to various cabs gives a good indication of  just how capable this tiny amp is. First, we tried wiring it up to a 4 Ohm Bergantino 2x12 cab. Unsurprisingly this gives you a great sounding, light-weight and compact rig that would handle nearly any gig, drawing as it does the full 300 watts from the amp. There's low end and power to spare.

Use it with a high-quality cab like this and you'll soon question why anyone would spend four or five times the price of the Nano on anything else. Sure, some of the amps we've used with this cab are way more powerful and have more complex preamps, but at low and mid level volumes, do they really sound better? Honestly, no. That's something to think about.

Linked to a single Markbass 1x15 plus horn cab, we used the Nano on a couple of gigs playing both double and electric bass. Although still impressive, used like this in conjunction with a single 8 Ohm speaker, the amp does start to run out of puff at (very) high volumes. But this is really using the Nano beyond its remit: overall it still punched way above its weight in terms of power, volume and in particular, tone.

The micro-amp market is still a fairly new niche; we guess the Gallien Krueger MB 200 would be the Nano's nearest equivalent. Just like that amp, we can see the Nano 300 being a big hit not only with bass guitarists looking for a simple and powerful amp, but also double bassists and even acoustic guitarists. Its warm and beautifully detailed sound makes even the most ordinary instrument sound accurate and classy.

Markbass is on to another winner here. There are plenty of players who want a light, neat and straightforward amp that's simple to use and has enough power for small gigs and rehearsals.

Although larger and a little less powerful, the Little Mark 250 Blackline might represent a better option for some of those guys, with its lower price and more comprehensive line out features - and those VPF and  VLE filters. But the Nano will not disappoint, and its combination of accurate sound, size, weight, power and price makes it a very tempting proposition.