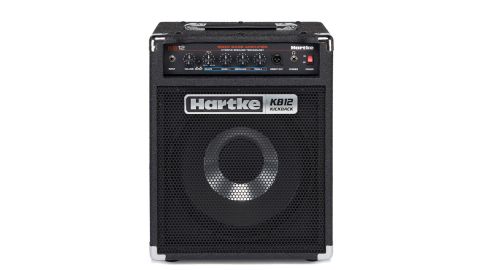 A winning update of an already solid package.

One of the strongest plus points of Hartke's Kickback series is its simplicity.

It does exactly what it says on the tin - the Kickback name itself refers to the design, which allows them to be 'kicked back' to point the amp upwards. The combos are not unique in this feature, but it's smart and user friendly, allowing the amp to be utilised in a full band practice but also tilted up when a bit more subtlety might be required - or if you are playing for someone up high...

The two combos offer the same 500W power, the only difference being (you've guessed it) a choice of 12" or 15" speaker. Hartke have utilised some pretty funky technology to keep the weights down in the series.

The cone driver is a mix of paper and aluminium: this, with the addition of Neodymium magnets means that the KB15 comes in at just over 16kg and the KB12 at just under 13kg. The 15 looks a big bit of kit with a powerful punch, but it's light and easily handled. This would be one practice amp you wouldn't mind hauling up a set of stairs.

The styling is, in line with the whole vibe, simple. The back is used simply for the power socket. The front is easily accessible with a standard on/off switch, input, phones and direct out, complemented with volume and shape controls (the latter bypassable with an in/out switch) and a three-band EQ. It's simple and effective, and if you have a good-quality bass, the boosts available through the EQ are plenty for most situations. If you want effects loops and other sophisticated features, then look elsewhere.

The tones you can achieve with this limited setup are fine. We wouldn't want to record with these options, but recording isn't what this series is for. As a live and practice combo the lack of complication is welcome, allowing you to concentrate on what you are playing, not what it sounds like.

Volume-wise, 500 watts is more than sufficient: we actually struggled to play at a low volume on the KB15, direct through the speaker. Whether you will ever need these combos driving anywhere near full whack is debatable, but it's better to have that option than not, and a 500W combo will suffice in all but the biggest of live settings.

The weight saving of the new range is very noticeable: the KB15 is over five kilos lighter than the Kickback 15. For the majority of us who don't have the luxury of a road crew, this should not be sniffed at. We could easily manoeuvre the KB15 using one hand - imagine that with a 500W combo 15 years ago - we remember, back in the old days utilising a small crane at practices, and sighing deeply whenever a gig at the Garage in Islington was mooted...

Hartke has revamped two already strong units. It has resisted the temptation to pimp the amps unnecessarily, concentrating instead on real world benefits - power and weight. In doing so, it has created a very worthwhile addition to the combo market.