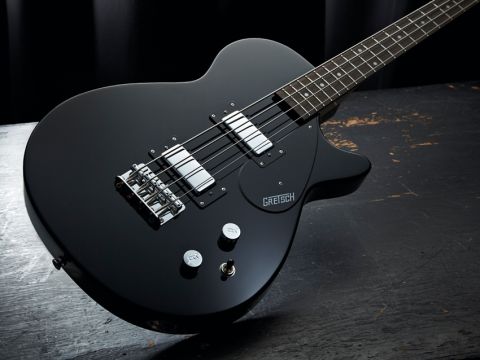 It might be out-spec'd by some other basses in its price range, but the Junior Jet Bass II's beefy neck profile and classic tones still score it a place in our good books.

Long regarded as a source of decent tones for a stingy outlay of lolly, the Gretsch Electromatic Junior Jet Bass has finally earned itself a facelift.

The bass is available as the twin-mini humbucker-equipped G2220 we see here and also as the G2214 version (£238.80), which comes minus the bridge humbucker and the three-way pickup switch. Both basses are short scale, which means they'll appeal to either physically small players, or indeed anyone looking for that short-scale, punchy mid, less piano-like electric bass tone. They also share a chubby bolt-on maple neck with a deep 'D' profile, topped with a rosewood fingerboard.

You get 20 well-seated and dressed medium jumbo frets, while the previous models only had 19. That's the fingerboard equivalent of 'one louder'.

We're pleased to see that the Junior Jet has retained its slab-like basswood body. It feels great hanging from your shoulders and who needs body contours when you've got a big belly for the bass to rest against anyway?

We have to admit to being surprised that Gretsch has chosen to stick with a bolt-on neck construction for these reboots. A bolt-on neck just isn't, well, very 'Gretsch' if you think about it.

We realise they aren't courting connoisseurs with the Junior Jets, but you can own a set neck bass at this price point: the Epiphone Les Paul Special Bass (£249) is one such arch rival waiting in the wings.

According to the marketing spiel that trumpeted the Junior Jet Bass II's arrival, we have every right to expect it to pump out that 'great Gretsch sound'.

Right. This is awkward. If we're honest, we didn't realise there was such a thing as a definitive Gretsch bass sound.

We know that nothing sounds quite like a Gretsch guitar, but this bass thing is news to us. We best get plugged in and find out what we've been missing.

Selecting the bridge pickup, we're up to speed immediately. This is the Jet's rock voice. It growls, a bit like a Gibson Thunderbird in fact, which makes it perfect for classic and modern rock scenarios: AC/DC, Foo Fighters, '70s punk bands. You get the idea.

Adding the 'neck' pickup transports us Mr Ben-style back to the '60s. Fiddling about with the tone control, you can get a convincing Small Faces-era Ronnie Lane sound; Beatle Paul is in there too if you take the time to find him.

If you're into the old-school mod vibe, we'd fit a set of flatwound strings in place of the 0.045 to 0.105 gauge roundwound set that comes as standard. They'd also work for blues and jazz tones should you need them.

The Junior Jet Bass II doesn't exactly have a voice all its own, but what it does provide are some great vintage-flavoured sounds, that work as well in '60s and '70s pop and rock as they do in any number of modern-retro situations.

Sniff around for a decent bass with 250 sheets burning a hole in your slacks and you'll soon find the world is very much your bivalve mollusc. Already showing up with a street price of £249, the Junior Jet Bass II should be on the shortlist of beginners, guitarists looking for a decent recording bass and, dare we say it, the borderline skint.

The Junior Jet, in both its formats, does face a lot of competition at this price point and we can't help feeling that Gretsch should have spec'd a set neck to increase its chances of being a contender. As it stands though, we still think it's a bit of a knockout.