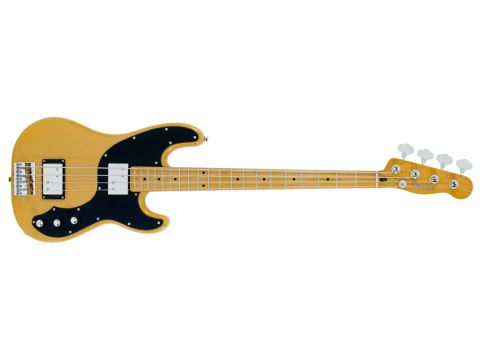 A fine retro-looking Fender bass with huge humbucking tones. What's not to like?

But don't take that to mean that there's not something interesting in the Modern Player range for you if you're one of the Fender faithful.

This Telecaster Bass is a handsome beast indeed and was Fender's first attempt to bring its classic basses bang up to date. When originally launched back in the seventies, Fender used the original P-Bass template from the fifties and raised the game by fitting it with a pair of imposing humbuckers.

This was design morphing in a truly delightful fashion, yet the Telecaster Bass has been somewhat elusive over the intervening years. So this is definitely the right time for a comeback and it's a wonderful bass to behold and play.

This butterscotch blonde finish is particularly attractive and evokes a nostalgic feeling, but the body is fully contoured so is far more comfortable to play than those early Precisions.

On the Telecaster Bass the 'split-coil' pole screw adjustment on the pickups reveals the 'hidden' P-Bass nature of these meaty humbuckers. They produce a far more throaty element to the sound than is associated with regular Fenders, as we found with the original version of this lovely bass.

Generally the neck pickup is dominant (which is a good thing for a bass) so to get the best blended sounds you need the tone control favouring the treble end. Only then is that delightfully honky edge revealed and it's totally unique to this pickup configuration on a Fender.

Overall, we are impressed with the quality and little evidence of cost cutting in looks, sounds or overall feel. The sound of the Telecaster Bass is so different from the general Fender bass tonality that it has the potential to convert the uninitiated - or indeed existing Precision and Jazz Bass owners - so is really worth trying.