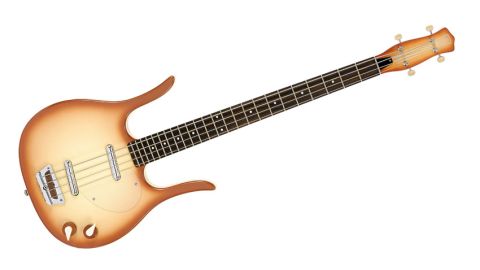 A well-priced bass with all the sounds and features associated with the early Longhorn designs. Ignore this at your peril.

The Longhorn is one of the most unusual-looking guitar/bass designs ever, but it has still earned a place in rock history. Championed by the likes of The Who's John Entwistle and Jack Bruce during Cream's Disraeli Gears sessions, its sounds and looks can't easily be forgotten.

The Longhorn's production history has been sporadic, partly due to Danelectro 's own chequered history. The current Danelectro brand resurfaced in the 90s, the first '58 Longhorn bass reissue appearing in 1998. Sadly, it only lasted a year, but since then it's made a few comebacks, each with a different specification.

This new Dead On '58 model isn't squarely based on the first 1958 Longhorn Bass, which had the two pickups set closer together towards the neck, but was altered to the spacing here because it provides far broader sounds.

Also, back in the late 50s there was no truss rod and the control knobs were wooden; today's model has an adjustable truss rod and plastic knobs.

The construction, however, certainly apes the original: the lyre-shaped plywood frame body is topped with hardboard - or Masonite, as Dano prefers. The edge is material-covered, and there's that extended heel for secure neck anchoring, the 24-fret fingerboard with a short 775mm (30.5-inch) scale and the 'Coke bottle' headstock with guitar-sized Kluson-style tuners.

Add the Copperburst finish, lipstick tube pickups, transparent scratchplate and stacked dual concentric volume/tone control knobs, and the Dead On '58 is quite a trip down memory lane.

Having two matching pickups with individual volume and tone controls means you can extract every tonal option available. Apparently, the pickups have been given a boost in output, but what's surprising is the wonderful richness of the sounds, particularly when you consider the lack of body mass and the short scale length.

There's a smoothness and warmth when you back the tone right off on either pickup, and things get bassy, too, but without loss of definition. In fact, all Danelectro guitars and basses, new and old, have fantastic note clarity and, as a result, good projection.

This is a great bass to play, with its slim neck and excellent upper fret access. However, the control knobs are strange at first. There's a proud pimple on the lower concentric knobs that catches on the upper pointers, so at times it moves the upper and lower controls at the same time. It's annoying, but not enough to put you off.

Lightweight, well balanced and with great tonal variation and delivery, the Longhorn is a joy to play. It's a bass to get you noticed, but one with a Marmite appeal. There has been an increase in popularity of many of the 50s and 60s guitar and bass designs that were somewhat dubious at the time; by comparison, the Danelectro Longhorn seems rather elegant.

Also, like many unique instruments, its appeal has grown, and its scarcity has added to its desirability. So, good timing from Danelectro, and a great return to form. Hopefully we'll see the six-string bass and Guitarlin Longhorns soon!