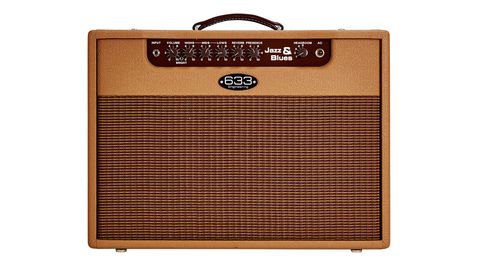 It’s perfect for jazz, blues and a lot more - an ideal partner for the keep-it-simple guitarist who wants a backseat grab-and-go combo.

It’s been a busy year for 633 founder and chief designer, Cliff Brown.

He’s moved 633 into a new factory, developed new models, and fulfilled a growing order book, all while continuing a second burgeoning musical career fronting his own band.

However, 633 Amplification continues to be Cliff’s main focus and this month we’re shaking down one of its latest designs to taxi out onto the runway, the Jazz & Blues combo.

The Jazz & Blues combo is an example of 633’s bespoke work - taking a customer’s demands and turning them into a product that meets, if not exceeds, all expectation.

The combo’s cosmetics are none more brown, with rough Tolex harmonising with the engraved control panel and knobs. On the rear panel, there’s a pair of speaker outlets with an impedance switch, and a pair of send and return jacks for the effects loop. This isn’t the standard kind of loop that sits in between pre and power amp sections, instead it sits right at the front of the amplifier, behind a unity gain buffer stage.

This lets you use pedals that wouldn’t normally sit in a loop, like wahs and overdrives, without affecting the guitar’s tone. The loop is footswitchable and the footswitch incorporates a power outlet as well as a remote EQ switch, letting you tweak the EQ when the loop is activated.

While the Drive King uses 6L6GC’s, the Jazz & Blues is equipped with a pair of 5881s, driving a single Celestion Alnico Gold 12” loudspeaker. The 5881 valve was originally developed in the USA by the famous Tung-Sol company of Newark, NJ, as an upgrade to the contemporary 6L6WGB; it was standard equipment in Fender’s higher-powered tweed amps from the 1950s, prior to the arrival of the more powerful 6L6WGC in 1959.

Like the Drive King, the Jazz & Blues is built to an exceptionally high standard inside and out, using similar construction methods.

The Jazz & Blues combo sits in traditional vintage Fender territory, with a tone that can shift from tweed to blackface, depending on midrange. The clever front-end loop takes drive pedals well, with little or no extra noise and the remote EQ switch restores tone that effects in the loop can remove. We liked its no-nonsense controls; there’s no master volume, so the headroom switch needs to be balanced with the volume control to achieve the right amount of clarity. Used with a band, we found that the second switch stop (15 watts) was more than enough for our needs, leaving plenty of headroom for bigger cleans if needed.

The superb digital reverb rounds out the sound for a truly professional result, saving you the cost of at least one effects pedal.

It’s been practically impossible to find fault with any 633 we’ve tried, and this amp is no different. It blends a range and clarity that we haven’t experienced on any other amp, with superb player-friendly dynamics.

On the thorny subject of price, it’s important to keep things in context. Firstly, the parts cost of a 633 amplifier has already increased by around £200 post-Brexit, and is set to continue rising. We’ve tried all the popular boutique D-style amps, which mostly have similar price tags, including one that was over double the price.

The Jazz & Blues combo does what it says on the can. It’s perfect for jazz, blues and a lot more - an ideal partner for the keep-it-simple guitarist who wants a backseat grab-and-go combo. It’s also expensive, but it’s in the same ballpark as some of its closest competitors. It’s built in the UK and unlike the competition, you can talk directly to the designer and vary its spec to suit your own personal needs.