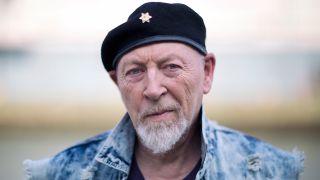 Touring and recording guitarist and Fairport Convention legend Richard Thompson is renowned for his work with alternate tunings - as heard on new album 13 Rivers - and in the video below, he shares his tuning tips and tricks for acoustic guitarists.

In the clip, Thompson explains how alternate tunings can lend your solo acoustic playing a fuller sound and bigger low-end.

The singer-songwriter focuses in on DADGAD and CGDGBE tunings, which he employed on songs such as his 1991 folk classic, 1952 Vincent Black Lightning.

Thompson also goes on to explain why Elixir Strings are his favourite acoustic guitar string choice.

“Between my sweaty hands and a typical concert environment, even the best strings would deteriorate and lose top-end in as little as 30 minutes,” he reveals. “But then I tried Elixir Strings. I love them for their tone, playability and that I can keep them on my guitar a really long time. Elixir Strings are the best out there.”

Best of all, longer tone life and fewer string changes means you don’t need to buy strings nearly as often - saving you money in the process.

Find out more about the acoustic guitar string coating options available to suit your playing style at Elixir Strings.