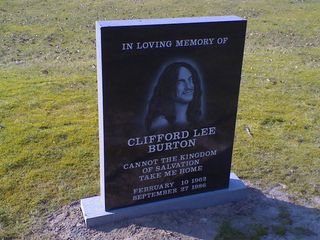 It has been confirmed that a digital representation of Cliff Burton is not set to feature in Guitar Hero: Metallica, despite the late bassist's performances being present on 13 of the 28 tracks slated for inclusion.

Speaking to MTV, the game's lead designer Alan Flores was asked whether Burton, who died when a tourbus overturned in 1986, would be included:

"I think I can definitely say no. That was actually kind of a sensitive thing with the guys in Metallica. We asked them about that and they never said no. They just went, 'Ehhh.'

"They didn't want to make [current bassist] Rob Trujillo feel like he wasn't as important a part of the band as he is. So there's no Cliff Burton in the game, but there's Cliff Burton in spirit. You get to play his basslines. We talk about him in the Metalli-facts [trivia] as well."

Burton's replacement Jason Newsted also appears to be overlooked, despite the inclusion of songs containing his studio performances in the game.

Online reaction to the news amongst the band's fanbase has so far been muted, with one fan summing up the overall mood: "The no Cliff thing is fine, it would be kinda creepy to have a digital Cliff in there."