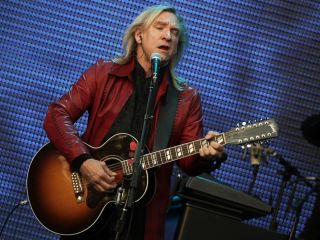 Having been a member of both the James Gang and the Eagles, Joe Walsh could indeed say that 'Life's Been Good.' But the legendary guitarist and singer has also enjoyed a successful solo career, although he hasn't put out an album of his own material since 1992's Songs For A Dying Planet.

That's about to change: On 5 June, Walsh will release the Jeff Lynne-produced Analog Man, on which he's joined by Ringo Starr, who happens to be his brother-in-law (the guitarist's wife is Marjorie Bach, sister of Barbara Bach, who is married to the former Beatle).

The 64-year-old rocker's distinctive slide guitar is prominently featured on the punchy, anti-modern technology screed in which Walsh sings, "Welcome to cyberspace, I'm lost in a fog/ everything's digital, I'm still analog/ when something goes wrong, I don't have a clue/ some 10-year-old smartass has to show me what to do."

Via the marvels of modern technology, you can check out Analog Man above.