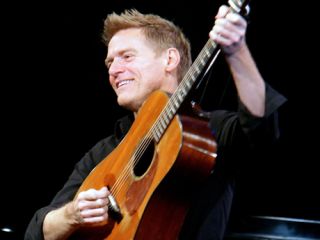 Bryan Adams' new solo acoustic CD, Bare Bones, will be released 1 November (16 November in the US), but according to the superstar, he's surprised that it's seeing the light of day at all. "I never had any intention of putting it out," he tells MusicRadar. "It was just going to be something to sell at the acoustic shows I've been doing because a lot of people wanted to have versions of the songs they've just heard. But the record company got a hold of it and said, 'Wait a minute…We want this.' So we're releasing it officially."

The 20-song collection is a career-spanning one, containing Adams' big-time hits (Cuts Like A Knife, Summer Of '69, Heaven - c'mon, you know them all), along with some lesser-known selections such as You're Still Beautiful To Me and Walk On By (no, not the Burt Bacharach smash, although that might have been interesting). Culled from different performances recorded during a one-week period in the spring of 2010, Bares Bones is just that: Bryan and his guitar, a harmonica and his voice (although he is accompanied at times by keyboardist Gary Breit).

Adams took part in MTV's highly successful Unplugged series in the mid-'90s, but he insists that Bare Bones is much different: "Unplugged was you with an acoustic, sure. But you could still have an orchestra or a 10-piece band backing you up. This is more 'un' than Unplugged. We're talkin' seat-of-the-pants here."

Bryan Adams recently took time out of his schedule to sit down with MusicRadar to talk about Bare Bones and his relationship with the acoustic guitar. In addition, he shared his thoughts on the music business of 2010 - in particular, file-sharing.

What was the motivation behind doing a solo acoustic tour?

"I've been wanting to do this for a while. In fact, my last album was supposed to be an acoustic record, but I wound up doing it with my band. The tour for that album, however, was pretty much solo acoustic - I hardly did any band shows at all. I guess you gotta get there when you get there."

The litmus test for any really great song is one you can sing and play on an acoustic guitar. But were there any in your catalogue that just didn't translate?

"Well, you can play any tune on an acoustic guitar. The only question is, will anybody like it? [laughs] There were a lot of people requesting songs - the hits as well as some that are lesser known - so you just have to go out there and see what works.

"There are always a few surprises, and those are the things you have to soak up and keep in your mind. I think I was pleasantly surprised that my new songs got a good response from the crowd. You kind of know going into this that the tunes people know, the hits, they're going to get a reaction. But when you play a song that people don't know so well and the give you positive energy, that's pretty cool.

"It's great to be able to experiment in this way. This tour has really affected my songwriting. It's got me re-energized as a performer and the way I approach touring. And of course, the interaction with the crowd has been fantastic."

Before you did this tour, did you have to brush up on your guitar skills? Did you spend a week at home woodshedding?

[laughs] "It was a lot more than a week at home! Man, I was practicing backstage, working things out a minute before I went on stage. And I still do that. You need to go out there and feel confident. You know, when I play with my band and I make a mistake, I can usually cover or one of the guys can fill up the sound somehow and nobody really notices. When you're up there by yourself and you make a mistake, you're on your own."

When you're at home, do you generally write on an acoustic?

"I don't generally write at home. I usually have to go away and lock myself up and get away from everything to write. But yeah, when I write, the first instrument I pick up is an acoustic."

From what I've seen, it looks like you're playing more Martin guitars on stage these days.

"I am. I have a couple of Martin D-18s from the '50s and one from the '40s. They're all really beautiful guitars. I generally take about three or four out with me on these kinds of shows. I don't usually break strings that much. When I first stared this tour, I would really lay into the guitars and strings were going everywhere. But I've kind of worked it out now, the dynamics. It took a while, but I think I might know now what I'm doing."

Do you play around with alternative tunings at all?

"Generally, I play around with a capo. Over the weekend, I played Cuts Like A Knife in E-flat. Usually, it's in D, but what happened was, I had a person on bagpipes come and join me, and let's face it, bagpipes only register in certain keys, so I couldn't get him to do it in D. I played the song up a key, and it sounded fine."

Are there any acoustic guitarists you particularly admire? Anybody you listened to before heading out on this tour?

"There's so many. Anybody who can pick up and acoustic and do a record such as this would have to have a reasonable take on the instrument. Neil Young is, of course, one of my favorites. But there's also guys like Ray LaMontagne - he's terrific."

You play a bit of harmonica on songs like I'm Ready. How do you rate your harp skills? To me, whenever somebody straps on an acoustic and plays harmonica, they immediately sound a little like Springsteen or Dylan.

"Absolutely. And Bruce and Dylan are both amazing guitar and harp players. I think I'm an OK harp player. I can certainly dig in. I've been playing harmonica since the '70s. I first recorded it in '81 on my second album. It's always an adventure, the harmonica - you never know where you're going to end up. It's a funny thing, though: it's a simple instrument to play, but simple and good are two different things!" [laughs]

During a show such as this, because it's so intimate, have there been any weird moments?

"So many that it would be impossible to tell you how many strange and silly things happened. Whether it's something funny that you find yourself doing or people hollering stuff, you just have to go with it and be able to laugh at those moments, along with your own inadequacies, or else you're doomed.

I heard a story that during one of your shows a glass bottle was dropped on the floor and it rolled down the aisle, making its way rather noisily down to the stage.

[laughs] "Oh yeah! That was a good one. I just had to wait and wait and wait for the thing to stop rolling down the aisle. But how could you not think that was funny? The whole crowd was rolling, it was great. Now, that happens during band shows all the time. The only difference is, you wouldn't hear it."

What can you tell me about some of your upcoming projects?

"Well, I've just finished the music to a film called Jock Of The Bushveld. It's an animated film about a dog. I do some narration in it, as well. And I've always finished writing songs for another film called Dorothy Of Oz - I worked with my longtime songwriting partner, Jim Vallance, on that. I just wrote a Christmas song. And who knows? There's already talk about another Bare Bones acoustic album. So we'll see."

You had mentioned how this tour has affected your songwriting. But what about the fact that you're getting older? I've noticed with many artists, as they mature, their writing gets more introspective.

"Well, I've had lots of those kinds of moments way before now. But what I try to do these days is have a lot more fun with my music. I'm having a great time, so if I can put a little humor in there, hey, why not?"

The landscape of the music business has changed so much since the time you got in the game. For an artist such as yourself, do you even need to be on a label anymore?

"Yeah, I do. Being on a label is still important, because things aren't as easy as they used to be. You need all the help you can get."

I've never read your thoughts on things like file-sharing. Where do you stand on the issue?

"I find it kind of astonishing that everybody has been so complacent about it, and I wish that more people in the artist community would stand up and do something about it. You know, it's one thing for guys like me who have been around for 30 years and have made my living off it and continue to, to some degree. But for the young songwriters coming up, they're going to have a tough time. Some people might write only one song, and it might be a big hit, but they won't make any money off of it. It's disgraceful. And it's disgraceful that people find it acceptable.

"If you make something and people enjoy it, you should be rewarded for it. You know, water comes from somewhere, but you still have to pay for it. The same should go for music. There are great songwriters out there who might have careers, but nothing like they did in the past. Some won't even be able to pay the rent. I think that's disgraceful."

If you were to able to talk to the Bryan Adams of 30 years ago, knowing what you know now, what advice would you give him?

"Focus on the music, the songs - those are the most important parts of what you do, and ultimately, they're the things that will carry you along. Don't worry about making a remark on your Twitter page; write great music."

You mentioned some of the projects you're working on, but what about another big rock record? Can we expect that at any point soon?

"With the full band? No, I don't have any plans for that. The direction I'm at right now is where I'm going to stay for a while. I'll still do some touring with my band - we'll be doing shows next year. But to bring everybody in and make an album...I don't know. I don't even know if it's worth it to make an album anymore. I think I'll concentrate on individual songs and EPs.

"Let's face it: Music is alive and bigger and better than ever. People have more access to it. I just wish that there was a way for young songwriters to be rewarded for their talent. There should almost be an artist alliance to try to push it through, particularly the bigger artists who wield a lot of power. I'm at the lower end of that totem pole, and in some ways, a bit of a lone voice. Any time somebody's spoken out about file-sharing and the legality of it, they get squashed. But I'm going to put my hand up and say, 'For the young guy, it's not fair.'"