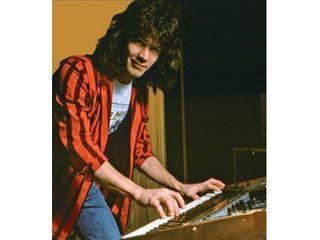 Eddie Van Halen: but what he really wants to do is play keyboards

1984 was the little keyboard intro from the Van Halen album of the same name that segued into the smash hit Jump.

To the best of anyone's knowledge, it is the only known recording of this elongated jam.

Check it out below. You'll hear Eddie on his Oberheim OB-Xa playing bits of other Van Halen tunes such as Top Of The World, I'll Wait and, of course, Jump. (And if you listen carefully, you just might detect a clam or two - hey, he's a guitarist!)