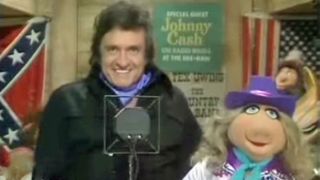 Bands play their fair share of odd gigs over the course of a career, but get the ol' goggle-box involved and suddenly things get a whole lot stranger - and what's more, they're broadcast for millions to see.

Here, we share our pick of the top weird, wonderful and memorable TV appearances from the likes of The Smiths to Slipknot and KISS to At The Drive-In. First up…

Before the critical reevaluation of his genius in the 2000s, the Man In Black took the work where he found it.

In 1980, that meant a barndance skit on The Muppet Show, with Cash puffing into twin harmonicas and canoodling with Miss Piggy (who tells him to "comb his hair").

The Mike Douglas Show was pure US daytime TV cheddar, so the KISS bassist was a surreal booking, arriving in full Demon regalia, flicking his tongue and declaring himself "evil incarnate".

In their debut appearance on British TV, the masked mentalists turned Chris Evans' indie ladfest into a circle-pit with Wait And Bleed.

"We lost two cameras there," says Evans, in the aftermath. "I have no idea where the camera man is…"

While Holland's producers scream down his earpiece, the Texas noiseniks unleash a chairflinging take of One Armed Scissor that registers on the Richter Scale.

The best bit is the slack-jawed expression of Robbie Williams, who's forced to follow them with limp new single, Supreme.

Kurt Cobain wasn't as serious as he's often portrayed and in November 1991, the Nirvana frontman ridiculed TOTP's miming policy by faux-strumming his guitar through Smells Like Teen Spirit, singing in a doomy warble and fellating the mic.

When you're a new band, you need all the publicity you can get - even if that means joining a busload of schoolkids for a day-trip to Kew Gardens.

"Where are we going?" one kid asks Morrissey. "We're all going mad," comes Moz's deadpan reply…

With Peter Buck cheerfully plunking on a banjo, the college-rockers pogo through an adapted version of Shiny Happy People retitled Furry Happy Monsters.

Having attempted to strum an acoustic and admitted defeat ("Because you've got to do two things at once") the US chat-show host brings out a Les Paul-toting Slash to accompany her on a painfully unfunny slow-blues. Cue much 'right on!' whooping…

Bowie made some odd decisions in the mid-70s - notoriously living on a diet of cocaine and milk - but teaming up with the cosy US crooner to mug through Little Drummer Boy topped the lot.

"The producers told him to take the lipstick off," remembers the host's son, "and take the earring out."