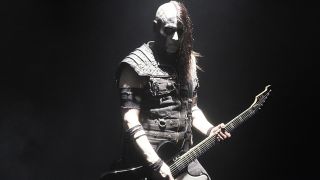 To stand alongside shock-rocker Wednesday 13, you've got to have some serious flair - and guitarist Roman Surman has the look and the licks to match Wednesday's eerie aura.

Roman's tastefully terrifying style is exemplified throughout new album Condolences, displaying a deft right hand for ultra-tight palm-muting and some of the creepiest Whammy use put to record.

Here, he talks us through his love for the big red box, an incident of extreme onstage illness and the story of a guitar called Gary…

“I actually can’t remember what kind of guitar it was. It had a name on the headstock like Gary or something. I’m not sure who Gary is, but he makes a shit guitar! It was an acoustic. I was about eight years old and really wanted an electric guitar, so I wasn’t having it. I managed to 'accidentally' break it about a month later, hoping to get an electric guitar in its place… all I got was in trouble.”

“I’ve really been stuck on my ESP Phoenix. I have a few of them, but theres one in particular that I’m over-protective of. It was a gift from a good friend, so I’m pretty attached to it.”

“I would say a [DigiTech] Whammy pedal. I bought one when I was 13, and didn’t even know what it did. I’m pretty sure I got it because it was big, red, and had lots of lights on it! It was my first pedal, so I had no idea what I was doing. Of course, I realised I was in way over my head as soon as I got it home. It was pretty rough to say the least, but I basically then made it my goal to figure out every single setting on there.

“I’m 41 now, and it’s still my favourite pedal. I’ve probably overused it over the past few years, but I’m a weirdo; I like making weird noises.”

“I had an '80s Ibanez RG270 that I was pretty fond of a while back - that had to go. I was kinda sad about it, but sometimes you need to eat and pay rent. That’s probably it, though. I have a hard time letting go of gear altogether. I really never had a lot, so I always tried to use what I had until it was broken or on fire, so I have a tendency to hang on to most things.”

“Yesterday, actually, and Wednesday 13 songs, of course! Our new record, Condolences comes out 2 June, so I’ve pretty much been going over all of those songs for the better part of a year now. We're days away from playing these songs live for the first time, and all of us can’t wait. I have lots of fun but kind of difficult parts on this new album, so of course I want to make sure they sound spot-on live. We headline the Dogtooth Stage at Download, so we’re all really looking forward to that.”

“I think for me it would be just to relax and trust in my instincts and abilities a little more.  I have a tendency to overthink parts, which in my case can cause mistakes. It’s strange, but some of the best shows I’ve had are the ones where my brain is on autopilot. Afterwards, I’m usually like 'wow, how the hell did I do that?!' and I had a blast the whole show. There’s an old saying: 'If you’re thinkin’, you’re stinkin’.' This definitely applies to me.”

“That’s a super-hard one. I’d have to say Dimebag. He was a god to me when I started playing, and still is. I’m from Texas, so when I was in high school, Pantera was everything to me. I’ve aways been a huge blues and metal fan, and that guy could fuse them together like nobody else, and I still think that today.

“He always pushed boundaries and came up with some of the most unique and original stuff ever. I don’t think we’ll see another like him ever, and I’m fine with that.”

“Most likely an acoustic guitar. You can’t really go wrong with that. Preferably an edible one, though… I hear island life can be harsh.”

“A few years back, Wednesday and I got crazy sick in Paris before a show. We don’t know what it was, but it was horrible! We had it coming out of both ends for hours. So brutal. It was a sold-out show, so we couldn’t cancel without feeling like jerks, so we went out there and did it.

“It was definitely the hardest show we’ve ever had to get through. We kept having to run offstage to puke in between songs, and we both collapsed in the dressing room after the show. It was quite a magical evening. Other than that, the stage has been pretty good to me.”

“I would definitely tell my eight-year-old idiot self to not break my first crappy Gary guitar. I didn’t get another one until years later, and probably would be better today for sticking with it. So if you’re out there somewhere, Gary… I’m sorry.”

Condolences is out now via Nuclear Blast.