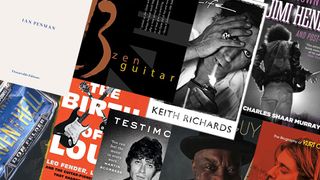 The Western world remains in lockdown. A cursory glance at the lifestyle pages tells us that right now we’re meant to be simultaneously working from home, working-out, inspiring our children, creating a disciplined regimen for every hobby, growing our own food, cooking everything from scratch and rebalancing our extensive investment portfolios.

We maintain, however, that right now you should probably just do what you need to do to get by and spend the rest of the time doing the things that make you happy.

We think these 10 books for guitarists might help with both of those goals. From astonishing biographies, to thought-provoking tuition and fascinating guitar history, here’s our pick of worthwhile distractions…

Author: Ian S. Port
Focussing on the mid-20th century sparring between Fender and Gibson, Port’s book The Birth Of Loud tells the story of the electric guitar against a backdrop of rivalry, technical innovation and some world-changing players.

This takes you not just into the minds and personalities of the postwar-era’s greatest guitar designers but also the scenes in which their instruments thrived.

Buy The Birth of Loud on Amazon

Author: Charles Shaar Murray
Hendrix is often hailed as a mythical boundary breaker, powered by an inherent genius, but Charles Shaar Murray’s superb investigation into the pop phenomenon dispels many harmful myths around the guitarists’ seemingly supernatural talent. Instead it focuses on how and why Hendrix did what he did and the, arguably greater, value of his remarkable accomplishments as a black artist who penetrated a pop culture dominated by 60s the rock scene’s white hegemony.

Author: Keith Richards
Keith Richards’ autobiography Life caused quite the stir on its launch, thanks in no small parts to a savvy PR campaign and some choice Jagger-baiting bites making the headlines.

However, while rich in the juicy and salacious, what’s wonderful about Life is the way it captures the languid humour of Richards’ voice: his rumbling inner-monologue explaining the thinking (and, at times, lack thereof) behind his personal and creative relationships, the ‘Stones highlights and lows and, of course, the addictions that he dealt with for decades.

Author: Don Felder
A straightforward rock bio documenting a remarkable life thus far, Felder’s tell-all focuses on telling his side of The Eagles tumultuous tale, with embarrassing levels of sex, drugs and rock ’n’ roll throughout.

What’s more, the six-string connections abound, from giving an unknown Tom Petty guitar lessons to cribbing slide techniques direct from Duane Allman, Joe Walsh’s side line as a prankster and meeting Keith Richards (passed out on a bathroom floor).

When I Left Home

Author: Buddy Guy
Buddy Guy is one of the planet’s finest blues guitarists. He is also the indisputable first-hand link between the founders of Chicago blues – the likes of Muddy Waters and Howlin’ Wolf – and the showmanship of the great rock players like Hendrix, Clapton, Jimmy Page, Keith Richards and Jeff Beck.

All of the above have hailed him as an influence and Guy’s incredible story in some ways set the template for blues iconography – literally taking him from an impoverished childhood in the cotton fields of Louisiana, up the Mississippi to Chicago where he made his name, via gun-toting promoters, blues greats and rock icons.

Buy When I Left Home on Amazon

Author: Philip Toshio Sudo
Zen Guitar is a manual for the six-string warriors of light. Eschewing the typical technique breakdowns and physical focus of the usual instructive titles, Zen Guitar instead considers the spiritual and mental approach of great guitarists. It’s about improving your mentality as a musician so you can better tap into that state of ‘in the moment’ flow so prized by the best players.

Heavier Than Heaven: The Biography of Kurt Cobain

Author: Charles R. Cross
The leading biography of the late, great Nirvana frontman. Author Charles R. Cross conducted exhaustive research, including more than a hundred interviews with the Cobain family, plus Courtney Love, Buzz Osbourne, Krist Novoselic, Dylan Carson, Jessica Hopper and Curt Kirkwood (to name a small selection). It is, emotionally, hard reading but extremely well-written and the sensitive subject matter is handled with great care. An eye-opening portrait of an icon.

Buy Heavier Than Heaven on Amazon

Author: Rob Young
This colossal tome (600+ pages) is the ultimate read for fans of the musicians and music of the British Isles.

It’s ostensibly the colourfully-told story of British folk music, but its main concern is the folk rock revival of the 60s and 70s (with guitar icons a-plenty) – including the likes of Richard Thompson and Fairport Convention, Nick Drake, John Martyn, Pentangle (which featured Bert Jansch) and on to the likes of The Beatles and Pink Floyd.

Author: Robbie Robertson
Few guitarists had a better view of the shifting cultural landscape in the 20th century than Robbie Robertson, the lynchpin of The Band and Bob Dylan’s first go-to electric player.

From joining The Hawks at 16 to his early meetings with Dylan and a stream of anecdotes from a rollercoaster life it’s packed full of insight – and even details some of the gear used on those iconic sessions.

It Gets Me Home, This Curving Track

Author: Ian Penman
This collection of music writing from celebrated British critic Ian Penman offers up a series of portraits of artists who created a sort of shared understanding across racial divides, “black artists who were innovators, white musicians who copied them for the mainstream”.

It’s not all guitar-focussed, but there are extensive and insightful pieces on The Mods, Steely Dan, Prince and the hugely-influential-yet-under-covered John Fahey.

Buy It Gets Me Home, This Curving Track on Amazon