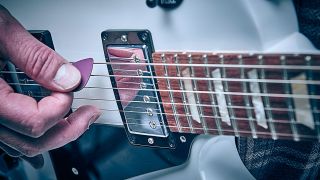 Guitar skills: Not only is blues a springboard for many other styles, such as country, rock and jazz, but it can also teach us many things about the art of phrasing in solos.

Often it’s the small technical details like string bends, slides and vibrato that go into making a great solo. The final piece of the puzzle for many guitarists, however, is targeting the best notes at the right moment.

With this in mind, this month we’re focusing on how to further your lead skills through clever use of space, harmony and note choice. We’ve even added an extra jam track for you to play over. There’s no right or wrong but an understanding of how each lick ‘fits’ over a certain chord or part of the progression is the key to improving.

Of course, learn the licks – if you’re into John Mayer, BB King, David Gilmour, even Guthrie Govan, these will be right up your street. Ultimately though your goal should be to choose some favourite phrases and incorporate them into your own playing.

We’re essentially borrowing the minor 3rd (8th fret first string and 5th fret third string) from the A minor pentatonic scale and transplanting it into our A major pentatonic lick. It’s a classic trick used in country, blues, rock ’n’ roll and rockabilly and the quarter-tone bends are a great way to hint at the major 3rd in the A7 chord.

Approaching a note from one fret above or below is a classic phrasing idea that’s well used in blues and jazz. You can even slide in from ‘wrong’ notes, but this is the beauty of the idea, as long as you slide to a ‘consonant’ note - that means a note that’s within the scale or chord you’re playing over.

The Mixolydian mode is the same as the major scale but with a b7 interval, which makes it sound great over dominant 7th chords (D7, A7 etc) - these are major chords with a b7, just like the mode. Mixing nicely with a D7 chord, our opening D9 arpeggio will instantly make you sound more musical. The sliding shape in bar 2 is a nice trick too.

The opening diad outlines the A7 chord - the C# and G notes are a dissonant b5 interval but sound great because both are in the chord (A C# E G). The challenge is the sliding bend. Pick the first note, bend up; as you release the bend, slide up to the 17th fret and bend the string again. David Gilmour and Guthrie Govan use similar techniques.

This is a creative lesson, rather than a purely technical one so aim to learn these ideas in different keys so that you can use them whenever you want. Obviously you can move the licks up or down the fretboard - that’s easy!

As you get more confident, why not try moving your favourite licks onto other strings? The fret gaps won’t necessarily be the same so you may need to get your thinking cap on! Playing all across the fretboard is a great improv skill to develop though, especially in blues.