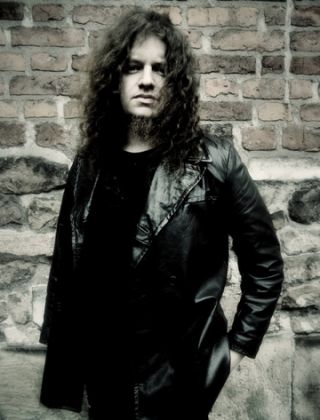 Guitarist Extra: We recently caught up with Fredrik Akesson from acclaimed Swedish progressive metallers Opeth for a piece that will appear in the next issue (334) of the magazine. But we couldn't resist dropping in some extra questions for the Guitarist.co.uk during our chat so Fredrik could share playing tips and insight about his career so far with us.

You're at the end of the Summer festival season now, how is the material for the next Opeth album coming along?

"Mikael [Åkerfeldt, Opeth mainman/singer/guitarist] recently showed me a riff that he's working on right now. Very different and very interesting! That's probably going to end up on the new Opeth album. He's working on two tracks for the next one at the moment. Mendez and I are working on material at my house. We'll see what happens, but we'll try and squeeze some material in there - see what the master says! [laughs]

The DVD of Opeth's Albert Hall show is being released soon, but was that your personal favourite gig from the run of anniversary shows last year?

"I think it was New York [at the Terminal 5 venue] because I felt it was maybe a bit better playing-wise. Small details most people wouldn't notice. I always compete with myself to play the perfect gig and that's what makes it fun to play."

What's been the highlight of your time in the band so far?

"Some gigs are magic - playing the Royal Albert Hall with the band was incredible. I saw the DVD and it looks very cool. I was a little unfortunate with the camerman stepping on my power though! I went silent in the last song - the whole rig died. A bit stressful standing in front of all those people."

You and Mikael are using the Fractal Axe-FX Ultra effects and amp modelling processor live now, is that right?

"I only use it in the loop for delays. Mike [Åkerfeldt] uses it as a power amp but I'm still particular about tube amps, a wah is the only effect I have out front. I don't use the amp simulations live but I do in the studio back home. It's very good."

As well as that, you're playing PRS through the Blackstar Series One, but is there anything else about your live rig we don't know about?

"I use a buffer pedal made by a guy who runs a Swedish company called Sound Of Silence www.soundofsilence.se. He analysed my setup and advised me to switch out all my cables. He also advised that the cable that goes from the amp to the wah pedal shouldn't necessarily be a guitar cable because it can colour the sound, it's better to sue a line cable.

"The buffer pedal boosts the sigal that's lost through the cable length. In A/B testing all this did makes a difference. IF you use EMG active pickups you don't really did it but the buffer pedal can compensate.
He also does tricks with wireless packs - puts a little chip in the belt pack that can compensate the sound if you're losing a little low end. It's pretty theory behind it all - I think I'm turning into Eric Johnson!"

Looking back on your journey as a player so far, do you have any advice to others?

"I think it's a good thing to be inspired by many different players but to inevitably find your own tone. When I was younger I listened to a lot of players but now I spend most of my time playing and improvising over chord changes I've recorded. I think that can be very useful.

"Also, I used to work out solos note for note - that's always a good thing if you want to learn new techniques and add more variation to your own playing."

If you weren't a guitar player what do you think you'd be doing for a living?

"Maybe I'd be a singer! Normal job? I've done a lot of shity jobs. I've been a construction worker, I've cleaned up after dead people… I don't want to go back to anything like that. Maybe I'd be working in a studio - close to music. Actually, I'd be a guitar tech. I've done it once before. One show with Dokken when [Europe guitarist] John Norum was in the band."

You're from the same town in Sweden as John aren't you?

"Yes, Upplands Väsby. I don't live there anymore though. I've written some material on John's solo albums and did some touring with him in the mid nineties. We jammed a lot back in the day. He has a great style, he was influential on me when I was a kid. He has great tone and his new solo album is cool - more seventies-influenced and bluesy."

You're obviously a player that works hard at developing your technique. Can you pinpoint when you've had breakthroughs over the years?

"I practised a lot between the age of 15 and 18 - six to eight hours a day. When I was 15 I dropped out of school to work at a factory to earn the money for my first Marshall amp. I played and Played and at 19 I joined a band called Talisman and learned a lot from them because they were older and had played with guys like Yngwie.

"Around 1998-2000 I started to mature as a player too, it wasn't just about playing fast. But it's an ongoing process - there's always something new to learn."

When you first joined Opeth, a lot of people may have seen you as a shredder. But there's a lot more to you than that as Mikael has said. Do you think people have realised that now?

"Yes and if you listen to Watershed there isn't that much shredding. It's a couple of runs - I had to squeeze something in! [laughs]

"But I hope people see that I try to be diverse. On the solos from Burden, for example, it's more of a vintage approach - Gilmour, Knopfler, early Blackmore. I try to play what's right for the song rather than getting in as much shred as possible to impress people. Shredding is fun but you have to be tasteful."

Opeth - In Live Concert At The Royal Albert Hall is released on September 20 through Roadrunner records and reviewed in issue 334 of Guitarist magazine.