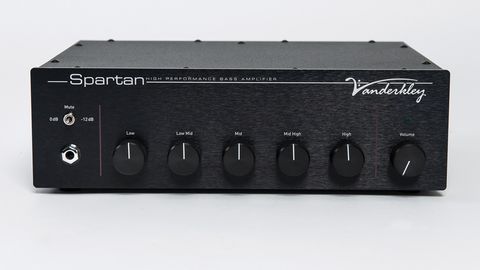 A classy amplifier, all the more elegant for its sheer simplicity.

Equipped with a cab which we knew would break if we accessed anything remotely close to the full power of the stunning new Vanderkley Spartan bass amplifier, the 2017 London Bass Guitar Show’s busy backstage area was a somewhat unorthodox testing ground for the Dutch manufacturer’s latest product.

We were also acutely aware that time was tight, having stolen Mark Vanderkley himself away from his busy exhibition stand so that he could properly introduce BGM to his latest creation. Once plugged in and ready to go, though, the Spartan demanded all of our attention...

“The Spartan is all about tone, power and simplicity. With this amp I tried to keep it as simple and as straightforward as possible,” says Vanderkley. “It’s only got three sections on the front panel. There’s the input, with the 0dB or -12dB. Then we have a five-band tone control; I kept the frequencies the same as our Aurora amplifier, because those worked really well. Then there’s the master volume. On the back, it’s just two speakers out and the DI out. It’s very basic.”

Mr Vanderkley’s not kidding. The Spartan is a very compact class-D amplifier, designed to appeal to those who believe that simple ideas are the best. Behind this amp’s anodised black chassis resides a not-for-the-faint-hearted 1600 watts of power, all housed in a big, Vanderkley stylised aluminium profile, helping the amp stay as cool as it looks. And at five kilos, the Spartan is user-friendly on more than one level.

It’s immediately clear that Vanderkley’s intended axis of “tone, power and simplicity” is a mission accomplished with bells on. The Spartan’s headroom ensures that this amp will cruise through any situation this side of sanity. Complementing such power is the rock-solid, clear tone, which can be easily manipulated using the five-band tone control. Its frequencies - low (40hz), low mid (90Hz), mid (600Hz), mid high (4kHz) and high (11kHz) - are each accessed via pleasingly responsive cut and boost tone controls. It’s all nice and easy, just as intended.

Of course, the flipside of such simplicity is what you don’t get for your not inconsiderable €1700, or around £1475  depending on exchange rates. For example, for such an outlay you might reasonably expect some commonplace features, such as a headphone socket, an aux input for an MP3 player, a serial FX loop, a tuner output and so on. Indeed, you would get those things with many other amp manufacturers in this price bracket - and, for that matter, far below it. However, to expect these features would be to completely ignore Vanderkley’s crystal clear mission statement for the Spartan.

There can be no mistaking what you’re buying when it comes to this product. Vanderkley has delivered a no-frills top-end bass amp, albeit with a price tag to match. However, while our testing conditions were far from ideal, we’re willing to bet there are dozens of our readers out there who were also lucky enough to try the Spartan at this year’s London Bass Guitar Show, and who will tell you the same thing: this is a very cool amp that does exactly what it says on the tin - beautifully.