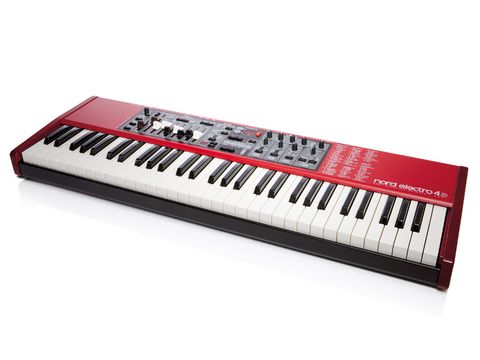 An evolutionary upgrade, the E4D subtly improves the E3 in all the right places.

It's three years since we reviewed the Electro 3 and concluded that it was one of the most authentic piano/organ and electric piano emulators around. Notably, while the Nord Wave was the first Nord board to feature user sample uploading, the E3 was the first Electro to include it, massively expanding its sonic range.

Subsequently, this feature has found its way on to the flagship Stage 2 series and the Nord Piano 2, and there's now a free and ever-expanding library of sampled sounds available via Nord's website. The Electro series' small and light form factor, plus this expandable sound library, means both the E3 and E4 are great investments.

All E3 models are still available (for now) and come in 61, 73-note semi-weighted and weighted (HP) variants, though currently the E4D is only available with a 61-note keyboard, which may be a little restricting for some. (We presume Nord will phase out the E3 and introduce an E4D SW73 and E4D HP but only time will tell.)

The semi-weighted waterfall keybed on the E4D (the same as the E3) is great for organ sounds and still controllable enough for playing piano-type sounds too, while the case and switchgear is built to the very sturdy standards we've come to expect from Nord. Note that the front panel layout is largely the same as the E3HP (the standard E3 doesn't have a delay effect like the E4D) but it's time for a bigger screen on the next revision: editing system settings is still pretty cryptic.

So, the Electro 4D is evolutionary rather than revolutionary, but that's not to say it doesn't have some very worthwhile changes on the surface and under the hood. The most obvious is the addition of real drawbars, something that for a while now players have been lobbying Nord for. The first Nord to feature real drawbars was the new C2D.

When we reviewed this powerful Hammond clone in FM253 we concluded that the real drawbars transformed the C2 into a real player's instrument - and the same can be said for the 4D. While the button/LED system on all models before the C2D is still a great system - and in some ways preferable due to the great LED visual feedback - you just can't beat real drawbars when playing live; there's just something more involving about grabbing some drawbars and getting stuck in.

It's worth running through how the physical drawbar settings are stored and recalled. Basically, if you have an organ patch selected, pressing the 'preset' button immediately recalls the patch as it was originally stored (though, unlike the button/LED system, the drawbars don't physically reflect the sound you're hearing and don't become active unless you hit the 'drawbar' button).

By either pressing the 'preset' or 'drawbar' button you can also handily flip between the preset/stored sound and the live drawbar setting, giving you two distinct sounds to play with, plus you can split the keyboard with independent drawbar settings and access the split via an external MIDI board too for dual manual action.

The organ engine has also been upgraded - it's the same as the C2D, Nord's flagship organ. We have few complaints about any of the revisions of Nord's organ engines - though again this one is evolutionary rather than revolutionary - and the sonics are absolutely spot on and very like a real B3.

The new B3 model sounds subtly chunkier and more in-your-face somehow when compared with the old E3 and the new key click and drive is superb, the key bounce feature (triggers the click when the key bounces) is a subtle yet important improvement, adding greatly to the overall playing experience, and the new Leslie 122 emulation (with close and distanced mic settings), extends the sonic palette nicely.

The fast speed setting sounds more solid and realistic than the Stage 2 and is certainly a match for the highly regarded Neo Ventilator. On that subject, many Stage 2 owners emailed Nord to ask if the C2D/E4D organ engine could be ported to the Stage 2 but currently it seems the answer is 'no'. That's a shame, as once again that leaves us with a flagship Nord without the latest features.

One last thing - and it's a biggie: the Electro 4D is still mono-timbral, so only one sound section can be used at a time (no layering or splitting of organ and piano sections). We really hope this changes with the next revision, particularly at this price point. Okay enough about the organ. What else has changed?

Well, the piano engine remains largely the same, with the same amount of memory onboard, but there's now a long release function which adds a more realistic long decay to the acoustic piano sounds. Like the organ improvements, this is a subtle addition but one that adds much again to the overall authenticity.

We're rather fond of Nord's piano samples as they sound more 'real' than most and you can choose from a number of excellent options bundled on the onboard DVD, or alternatively download extra sounds from the Nord website using the Nord Sound Manager application for Mac or PC, which provides a very elegant way to manage sounds and update the OS.

Our favourite piano sounds include the warm and comfy 'Steinway Grand Lady D' and the 'Yamaha Bright Grand' plus there are some really great uprights onboard too. All the piano samples can be in stereo or mono and while the number you can have onboard at once is constrained by memory, Nord do provide different-sized samples if you wish to have more sounds onboard (by forfeiting the long release samples, for example).

The electric piano samples are still up there as some of the best on the market, however since the Korg Kronos dropped, we're starting to feel like Nord could do with some new killer Rhodes samples. The ones onboard are still excellent, but it needs a new barkier model for upfront soloing.

We'd also like to see Nord subtly detune any new sample(s) to add more movement to the static sound, as the ones onboard sound a little too in tune - for our ears at least - and we often end up adding a subtle chorus or phaser to get that understated beating you get on a real Rhodes (which should never sound perfectly in tune). It would also be nice to have case resonance and long release samples for the Rhodes samples too.

Let's also not forget the Wurli and CP80 samples which are still great, but again these could both benefit from string resonance and long release samples. The clav samples are still the most real sounding onboard any keyboard (apart from dedicated DAW libraries) although again, a revision is probably due, ideally with a mute sample and key on/off noise.

To sum up, the biggest reason to grab the E4D over the E3 is the upgraded organ engine rotary/drive simulation, the delay (which the E3HP also has) and of course the eagerly anticipated real drawbars, which will massively increase the Electro series' appeal to organ players and non organists alike. Not to mention the addition of the longrelease function for the pianos and the very handy MIDI-over-USB as well.

All things considered then, the E3 has definitely been improved in the right direction. It's time, however, for Nord to spruce up the electric piano/clav samples and we hope that the E5 is multi-timbral, has a pitch bend and mod wheel, and the ability to use the delay and reverb separately. For now though, the E4D deserves to be at the top of your list at this price point as its features, playability, portability and, more importantly, sounds are still right up there.