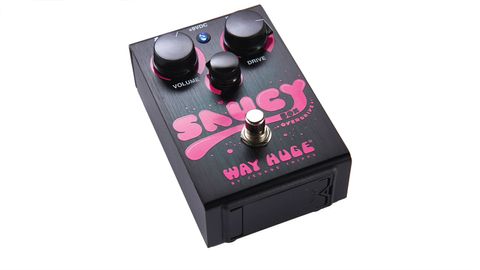 On occasion, we have extolled the benefits of overdrives with clean blend controls; adding a hint of clean to a driven tone brings a clarity that you won't get from your common- or-garden dirt box. Now, legendary pedal designer Jeorge Tripps and his Way Huge boffins reckon they've nailed the secret recipe behind blended sounds.

Rather than a standalone clean blend control, as you'd find on, say, the Voodoo Lab Sparkle Drive or T-Rex Diva Drive, the Saucy Box offers what its designers deem the 'optimum ratio' of its discrete clean and overdrive signals, which changes when you twist the drive knob. Combined with the sensible tone control range, it makes getting great tones easy as pie.

The Saucy Box's gain has a spongy, saturated feel, like an old valve combo pushed to the brim. And that's where the clean blend plays its part: while it never makes its presence overtly obvious, it's always there, preventing even the highest drives from sounding muffled or indistinct.

The tone knob takes you from syrupy Bonamassa-style leads to Plexi-style bite, while the rich harmonic overtones that accompany sustained notes will have you hitting open chords over and over.

While it's one for vintage overdrive nuts rather than gain fiends, the Saucy Box has one of the most amp-like feels we've heard from a stompbox in recent years; it feels like a drive where you can dig in and feel the pedal bite back.