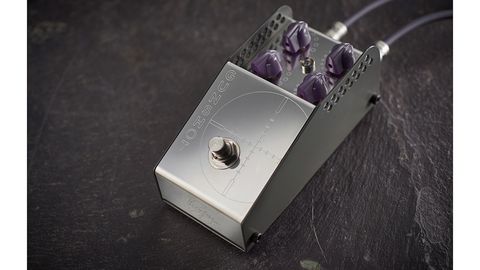 A commanding, versatile hard-rock overdrive that thinks it's a hot-rod head.

First in a small range of belligerently named effects, the Gunshot is hand-built by Adrian Thorpe, an explosives expert serving in the British Army.

The exacting standards of his day job have been carried over into the Gunshot, which has some of the most zeroed-in build quality we've seen.

Components are top-drawer, including audiophile-grade Burr Brown op-amps, Wima and Panasonic capacitors and dust-sealed potentiometers. Perhaps surprisingly, there's no charge-pump circuitry to elevate internal voltage (as in the Klon Centaur) for extra punch.

Instead, Adrian has relied on high-spec parts and thoughtful design to keep compression taut and amp-like, with plenty of bite. The pedal runs off a nine-volt centre-negative supply or a battery housed inside the heavyweight, laser-cut steel enclosure - you will try in vain to break it. Access is simple and secure, if not especially rapid, via four hex bolts.

The tonal heart of the Gunshot, meanwhile, beats in its dual gain stages. Calibre is the first gain stage and is voiced for low-end grunt and biting treble.

Next in line, the Gain control adds the mids back in with its TS-style drive tones. It's easy to see how blending one with t'other gives you huge scope to focus the voicing and breakup characteristics of the Gunshot to suit your rig - especially when the Level and Tone controls are also brought into play.

Note that Calibre works by adjusting bias, so it will crackle when the knob is turned - that's not a dodgy pot, but inherent in the design.

The dual gain stages make the Gunshot tonally mercurial, but with all controls at noon, it's an aggressive yet warm drive, with sharktooth upper mids, which excels at hard rock and vintage metal.

There's no fizz, just lots of woody, rip-snorting bite that reminded us of classic Marshall amps at full chat. At brighter settings, the Gunshot articulates harmonically rich chords very clearly, making it an option for intricate, cerebral prog, too. Crank up both Gain and Calibre, and beefsteak Van Halen and AC/DC lead tones erupt from the amp - think Back In Black meets Jamie's Cryin'.

A bright amp with a hard, efficient speaker such as our Mesa Recto-Verb 25 reveals the pedal's detailed harmonic content - at the expense of some warmth. We liked it better through a Vox AC15C1, where the amp's pliable power stage and softer Greenback driver gelled with the pedal's edginess beautifully, as if you'd added a high-gain channel to the amp.