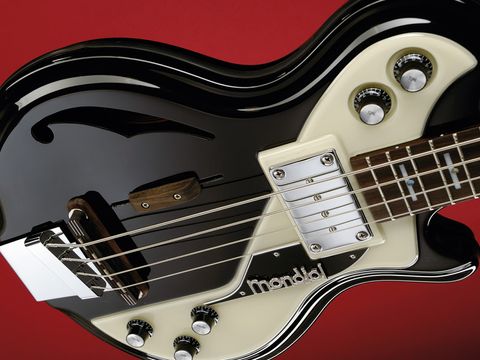 This will never achieve mass appeal but in this look-alike climate but it certainly stands out.

Despite being some of the earliest bass guitars ever made (you'll find that Hofner and Framus models from the fifties are still highly collectable today), semi-hollow body basses have never really enjoyed the same level of success or popularity as their all-solid counterparts.

However, if you want something that looks different from the mainstream, and also operates in a unique manner, then this Trevor Wilkinson designed Mondial from Italia could well be the answer. With its cool fifties styling and colour options, this is a bold retro look that you'll either fall in love with or absolutely hate.

The body of the bass is assembled from two sections: the back and the top. The back is agathis, to which a plastic 'Acousti-Glas' moulded top is fitted by means of a joint that runs all around the body edge with a seal to hold it all in place.

The top is formed into the scratchplate, pickup surround and f-hole and the fittings - bridge, tailpiece, electronics and nameplate - are attached to it. The final assembly leaves a chambered area around the f-hole and the neck bolts to the wooden back.

It's a regular maple neck but with a painted finish and, like the rosewood fingerboard, it's smooth and silky to the touch; the fretting is very tidy and the fret ends are well bevelled and dressed. Having a combination of blocks and dots as inlays works well and certainly adds to the visual interest here.

The same can be said of the sealed gear tuners with their large oval grips, reminding us of that brief phase in the sixties when Fender tried something similar.

The bridge is a wooden structure using fret wire as saddles (in Hofner fashion), which adds further to that European vibe: a neat addition is the sliding thumb rest, making it easier for finger players to pluck nearer the bridge for a harder-edged sound.

The chromed tailpiece offers good visual balance to the humbucker and has an anchor block that fully houses the string ball ends.

Sound-crafting with the Mondial is fun but it takes a bit of navigating to figure out what does what, in spite of controls being clearly labelled. This is because there are two circuits: one for the conventional magnetic humbucker and one for the piezo under the bridge - a jack socket is provided for each.

It means that the Mondial can work in two different ways, using either the regular humbucker or the piezo for the more 'acoustic' sounds - and with the right EQ that can be achieved to a reasonable level. Further fine tweaking can be achieved in the battery compartment, beneath the battery itself, if you want.

Although the humbucker has only a single tone control, it still provides some rewarding bass thump with just enough variation to keep notes clear and interesting. This is obviously where the more conventional tones are achieved.

The piezo, however, has the advantage of active treble and bass (situated at the top cutaway), with cut and boost, to allow far more tonal adjustment and to emphasise the 'acoustic' nature.

Of course, if you have two channels on your amp, a splitter lead or two amps you could even use both together, but the whole purpose of this bass is to present the player with different opportunities and it certainly does that.

Italia has gone out of its way to provide us with something unusual here, but at the same time it's stylish and good to play. It's a real mixture of ideas too. A bit of Art Deco-ish retro design from the trapeze tailpiece, minimalist oval tuners, pearloid block inlays and abalone dots, f-hole and of course the Jekyll and Hyde electronic alternatives of 'acoustic' piezo and regular magnetic sounds makes it something of a jack of all trades but masterful too.

If you want something different then this most certainly is… and it sounds pretty good too!