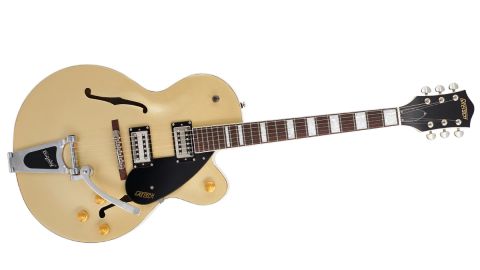 The deep hollowbody G2420T is hugely evocative and perfect for lower-volume older styles.

The Streamliner concept is simple: to create more affordable Gretsch guitars without losing their specific DNA.

There are two Bigsby versions of each model (the only difference being the sole colour they are offered in), and one hard-tail version that, along with a single G2622 lefty, creates a 10-strong range. Despite the different styles, there are just two prices: the non-Bigsby versions cost £350; the Bigsby-equipped models and the lefty are £395, pretty much half the price of the existing Electromatics. Today we're looking at the G2420T.

The Streamliner models share a majority of features. Each has two new Broad'Tron humbuckers controlled in classic Gretsch style by a three-way toggle selector switch on the bass side shoulder, a master volume on the treble side horn, and then a trio of controls by the treble-side f-hole for individual-pickup volume and master tone.

Construction follows the hollow/semi protocol of laminated maple top, back and sides, although on the G2622 and G2655 there's a new-design centre block that is mainly hollow.

All have the same slightly longer scale length of 629mm (24.75 inches), bound rosewood 'boards, a 305mm (12-inch) radius, and the same profile nato (as opposed to maple) necks. Gretsch is calling the frets 'medium jumbo', though at approximately 2mm wide and 0.9mm high we'd say that's a misnomer - they are certainly smaller than the 'medium jumbo' wire of the Electromatics, which measures approximately 2.65mm wide with a pretty similar height.

Then there are the large block fingerboard inlays that nod back to the 70s; the headstock outline follows the classic 6120 shape with a gold logo and no series name while the smaller size f-holes follow those from Gretsch's Baldwin-owned era (1967 to 1980).

The clear-topped acrylic control knobs, with either gold or black coloured bases, actually revisit a design used by Gretsch in the early 50s, before knurled metal knobs, while the 'teardrop' pickguards emulate those on the Duo Jet.

Side-by-side with an Electromatic G5420T, the Streamliner - which is nearly halfthe price - certainly doesn't look cheap, especially in its new muted Gold Metallic finish. Aside from slightly untidy f-holes, the finish is cleanly edge-scraped, revealing a white binding, top and back, with an inner black line. Internally, it's certainly clean.

The dual top braces are actually smoother to the touch than those on the Electromatic and there are very similar kerfed linings. There is, however, no post under the bridge, connecting top to back, which may have an impact on its tendency to feed back. In places, it's not sanded quite as smoothly as the Electromatic, and the arching to the top and back seems a little pinched in the waist.

The neck has a similar headstock splice and heel piece to the Electromatic, and although the neck shape has a slightly flatter back, it's a little deeper than our reference G5420T: 21.7mm at the 1st fret, 24.3mm at the 10th, as opposed to 20.8mm and 23.2mm. The fretwork is good, the fret ends sit over the binding and those big block inlays are crisply inlaid. The licensed Bigsby B60 and Gretsch's anchored wood-based Adjusto-Matic tune-o-matic-style bridge are identical to the Electromatic G5420T.

A small point: instead of Gretsch's usual knurled metal locking strap buttons, the ones here are standard.

Strapped on, the G2420T feels huge if you're coming from a Les Paul, but its relative light weight hangs well on a strap. Listening to our reference Electromatic G5420T, there's an instant, unique Gretsch tonality: a combination of its shorter archtop-like sustain married to low output; clean pickups that avoid being over-sharp thanks to the hollow body, but still have a crystalline snap to the highs; a more bell- like mix; and a sort of hot single-coil neck voice.

Switch to the G2420T and there's a big difference, not least in a reduced feedback threshold. There's a thicker, more generic sound, but still with some Gretsch-ness, which for many players could be just as much an advantage as not. The master volume is very useful, especially on such a big guitar with a Bigsby.

The arm of the Bigsby itself sits right above those standard controls, but it does mute the highs a little as you reduce it. Overall. it's a thicker, hotter version of a 6120 that suits dirtier tones.