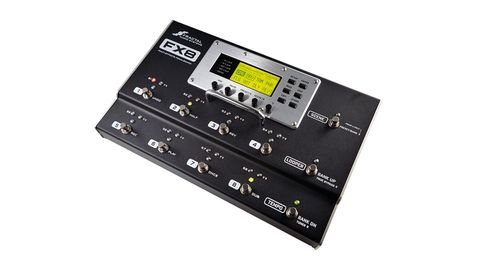 What you are buying into is pro-level gear in a unit that's built like a nuclear bunker, with unsurpassed audio quality.

Buying a multieffects pedal is a sure-fire way to get hold of a large arsenal of effects. Of course, the downside is that you're stuck with effects from one particular company, but if that company is Fractal Audio, makers of the Axe-Fx range, we doubt many people would mind.

Taking just the effects from the rackmount Axe-Fx II, the FX8 is a pedalboard for those who prefer to use their own amp, rather than rely on Fractal's modelled amp sims. The FX8 can store 128 virtual pedalboards - in banks of eight - to be recalled at will.

Each pedalboard can supply eight simultaneous effects, each with their own footswitch, chosen from over 20 effects genres, populated with 130 individual effects.

For extra flexibility, each of the effects blocks has switchable X and Y settings - perhaps a fuzz and an overdrive, or maybe the same overdrive with two gain levels.

Besides footswitches one to eight, the FX8 has a further three footswitches with multiple functions. Two of them select the preset banks but also call up the onboard tuner, operate tap tempo or turn on the unit's four-minute stereo looper (which, when activated, has seven footswitches at its disposal).

Probably the most crucial footswitch is Scene, which unleashes one of the FX8's coolest features. Each preset has eight scenes, and a scene can make several effects blocks active at once, complete with a stored X and Y setting, but it can also operate your amp's channel switching if you connect it to one of the FX8's relay outputs. That gives you an easily, ultra-flexible switching system where you can always see what's happening courtesy of three separate-coloured LEDs.

You can put the FX8 before your amp but, using four cables, you can have some of its effects blocks in front of your amp and some in its effects loop. You also get provision to add a couple of expression pedals to control effects.

The key to using the FX8 is to create your own presets, whether it's a single signature pedalboard to be used universally, or a different one for each song in the set. While you can do all that from the front panel, the smart way is to take advantage of the free FX8-Edit software, which allows you to edit presets on a PC or Mac.

What's more, every effect you could ever wish for is here - from wah to pitch to rhythmic tremolo and vocal formant sounds. Add in the flexible routing in effect block order and serial or parallel operation, and there are some serious sound-creation possibilities on offer here.

Okay, so the FX8 will set you back over £1,100, but putting together a collection of pedals with board, cabling, power supply and switcher could cost you just as much and be nowhere near as flexible.