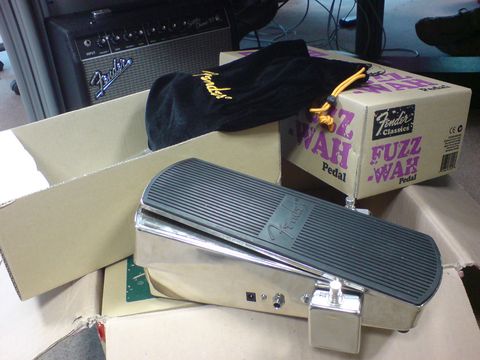 A two-in-one bargain with a sound that is bigger than the sum of its parts.

Long before specialist effects pedal companies became the norm, players looked to the big amp and guitar manufacturers for their stompbox fix.

Vox's Tonebender and Wah pedal are well known, Gibson had the Maestros and Fender had several pedals in its range; pedals that the company has now seen fit to reissue as the 'Classic' series. We've already taken a look at the Fender Blender fuzz pedal so here is the new Fuzz Wah.

While Fender may have updated these pedals with some modern features, there has certainly been no downsizing as a concession to the modern era's crowded pedalboard - these things are massive and weighty, which may be no bad thing as their bulk keeps them firmly underfoot. The Fuzz Wah is powered by a standard 9V battery or a power adaptor.

Putting Fuzz and Wah in a single pedal is not something that is exclusive to Fender, but the way it's implemented is.

Where other manufacturers have combined a fuzzbox with a wah pedal, the fuzz is usually switchable and may have one or more knobs to set the level.

It also may be possible to control the fuzz with the up/down pedal treadle action when the wah is not in use.

Fender's take on this is much cleverer - while the pedal treadle operates in the standard up and down manner, like any other wah pedal, it has a slim top plate that can travel independently from side-to-side (about an inch in either direction); this left-to-right motion increasing the amount of fuzz.

Footswitches attached to the sides of the pedal towards its rear turn the wah and fuzz on and off independently, and the order of the effects can be set with a small switch on the underside of the pedal to let you wah your fuzz or fuzz your wah.

The only other control is again underneath the pedal and is a recessed rotary control that can be turned with a screwdriver to set the fuzz volume level to where you want it to match levels, or to dial in a volume boost when the fuzz is switched in.

The wah aspect of this pedal covers a wide bass to treble range that doesn't get too extreme, but sweeps the mid-range for an organic, expressive vocal quality.

Switch the 'fuzz' on and what you get is not the typical sixties fuzzbox sound you might have expected, but more akin to the grit of a decent overdrive pedal.

The amount of this available is perfect - from just overdriven to a throaty valve-like roar that can be your total dirty sound or drive a driven amp even further.

With both wah and fuzz engaged there are some classic sounds just waiting to be heard. The ability to switch effects order adds even more versatility to a pedal that, with its two staple effects and a unique ability to tweak both simultaneously with some foot acrobatics, would already be ahead of the pack.

Fuzz and Wah or Wah and Fuzz? You can take your pick and either way it's a glorious sound and the Fender Fuzz Wah provides it effortlessly.