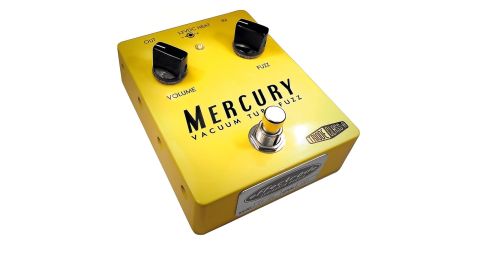 Quality valve-driven pedals that could become an essential part of your tone.

Effectrode specialises in valve-driven stompboxes and has just released the Mercury Fuzz, a limited-edition pedal based around NOS components - a Philips subminiature valve and vintage germanium diodes.

The Mercury follows on from the now sold out Helios valve-driven fuzz, but uses a different valve, one that Effectrode designer Phil Taylor says delivers "fatter, more robust sounding fuzz".

Powered from a supplied 12-volt adaptor, the Mercury sports standard volume and fuzz knobs. At lower levels of the fuzz knob there are some tasty overdrive sounds, but whack it up and you get a lovely fat creamy fuzz sound with plenty of sustain and harmonic content.

The sound is naturally vibrant but there's an internal Bright trimpot to roll off or accentuate top end above 2kHz, offering subtle shading. For a different fuzz voice, there's an external Heat switch that allows the second valve stage to be operated at a reduced plate voltage (known as starving the valve).

Flick this switch and the fuzz gets harder, tighter and less squashy, the actual sound depending on how low a plate voltage you dial in with a second internal trim pot, offering a range of alternatives that add to the pedal's versatility.

The pedal has excellent silent switching with no thumps or pops, but the necessary circuitry does cause a momentary volume dip, which may require some careful synchronisation for those who wish to kick it in for solos.

However, seeing as this is the sort of tone-building pedal you'd keep on all the time, that may well be an irrelevance.

Residing in the upper echelons of the stompbox hierarchy, Effectrode pedals cost a fair whack but if you are willing to spend over £200 on a pedal, we reckon that the price tag is justified - you're not only getting a hand-built pedal, ruggedly put together for heavy road use, but you're also getting an original valve-driven design that isn't a mere clone.