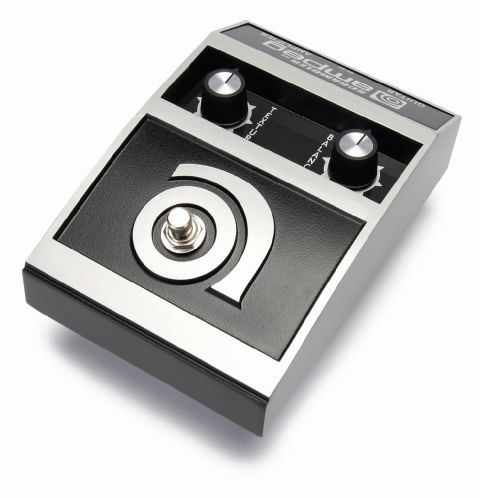 While it might not be a pedal you'd use every day, it's still a great investment. With unique and gorgeous sounds, this could be the missing piece you've been looking for.

In the world of effects there are some stompboxes that have become the stuff of myth and legend - some purely for their sound, others for their rarity value.

The Ampeg Scrambler is one of a small set that has become legendary on both counts.

It has a unique and sought after upper octave fuzz sound, but you'd have more chance of finding Elvis stacking shelves in your local Tesco than finding one second-hand market.

It sounds like the perfect excuse for a reissue, then. Which is just what Ampeg has done.

The Scrambler first appeared in 1969 and wasn't a great commercial success, although it was notably used by the late John Cipollina of San Francisco's Quicksilver Messenger Service.

With between 2,000 and 2,500 units built, production only lasted for a year or so and the Scrambler may have been forgotten if it hadn't been rediscovered by the likes of The Edge and Jon Spencer.

The new reissue stays fairly true, at least in external appearance, to the original.

Internally it may be a different matter, this one features neat circuits while the original's electronics were apparently encased and concealed in a block of resin.

One thing that's sure is that this is one heavy pedal, solidly constructed from thick diecast metal - you'll get double the value by using it as a doorstop when you're not gigging.

A pair of control knobs are sunk relatively kick-proof into a depression on the top surface and the true bypass footswitching is reassuringly clunky.

Alternatively, a jack for a standard 9V adaptor is provided between the input and output jacks, but Ampeg has resisted the temptation to add an on/off LED.

The Scrambler is basically a fuzzbox with a distortion circuit that adds upper octave harmonic content while blending the effect with your signal.

The key to getting a sound is down to the texture and balance knobs.

The balance knob adds in a proportion of the effected sound to the straight input signal; turning clockwise you go from a completely dry signal to 100 per cent effect.

The texture knob changes the type of harmonic distortion, clockwise rotation results in an upper harmonic being added to the sound.

There are two main elements to the Scrambler's sound.

The first is fuzz and the second is those upper octave harmonics that can be added to the fuzz sound.

With the texture knob all the way down the unit operates as a fairly orthodox fuzzbox.

The fuzz only begins to become apparent as the balance knob is turned up. Turn it up slightly and you get an edgy overdriven sound as the fuzz blends with the clean sound.

Advance the knob further into its upper reaches and you get into real thick full-on fuzz territory.

A lack of tone control might be seen as a drawback, but the voicing is well chosen and it imparts a raspy, authentic 60s garage vibe but with a full balance of frequencies.

It's in the dialling in of the upper octave effect, though, where things really start to take off and set the Scrambler apart from the pack.

The upper octave tone itself has a not-unpleasant metallic quality that immediately starts to enlarge and enhance the overall sound.

With both knobs full up the temptation to launch into Purple Haze is just too strong and the Ampeg carries it off in style, those upper harmonics adding an extra tonal dimension to the single notes.

Some full chords can sound a bit messy, but modal power chords and double stops come alive with a real throaty rasp and a hint of ring modulation as subliminal extra tones creep through.

There's a huge variation of effect available through careful positioning of the Scrambler's two knobs.

One of our favourites is to turn the texture up full but with keep balance pulled back to around a 50 per cent mix.

The effect of this with a nicely overdriven amp is that the picked fundamental note comes through loud and clear, but as it decays the upper octave starts to poke through - a great thing to induce on slow burning solos.

There's little to criticise the Scrambler on really, but Ampeg's policy of sticking to the retro design has deprived us of an on/off LED. But then, there's no mistaking when this thing is on!

The Scrambler produces a glorious sound and, through the juxtaposition of the two knobs, there are many subtle and not so subtle variations of that sound available.

If you're looking for a standard fuzz pedal there are lot of less expensive options out there, but the Scrambler has a sonic signature that is all its own.

A fine stompbox to integrate into your pedal board, it might not be something you'd kick in too often during a live set, but it would have real impact.

It's the sort of pedal that a recording guitarist would want to keep at hand for those occasions when something different is called for. Just ask U2.

When recording the song Kite, it was felt that something was missing - the resultant solo came about by The Edge plugging his Gretsch into a Scrambler and an AC30.

Not a bad recommendation.