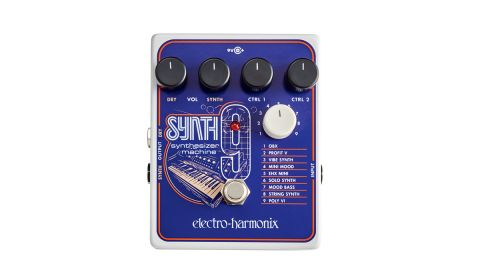 It may be something of a niche product, but for some this will do a job and do it darn well.

The Synth9 is the latest in Electro-Harmonix’s series of stompboxes that gives your guitar the sound of a vintage synth.

So far, the EHX has emulated organs with its B9 and C9 pedals, electric pianos with the KEY9, and the vintage Mellotron with the MEL9. The Synth9 follows the blueprint of those four pedals and offers up the sound of nine different synthesizers to be played directly from your guitar.

The pedal takes the input directly from your guitar and delivers both synth and dry sound from its ‘Synth’ output with the ability to have pure synth or create a blend courtesy of dedicated volume knobs for the Dry and Synth sounds. There’s also a ‘Dry’ output that purely passes the input signal, so you can have a totally separate standard guitar signal chain sent to a separate destination.

The nine preset sounds, selected via a rotary knob, can be tweaked with two further knobs, CTRL 1 and CTRL 2, that offer specific functions for each preset sound - CTRL 1 usually offering either Tonal or Filter Sweep adjustment, while CTRL 2 adjusts the octave range for five of the nine.

Electro-Harmonix makes certain recommendations for using the Synth9. Most important of these is it’s usually best to have it as the first pedal in the effects chain so the input ‘sees’ a strong signal for stable tracking.

Overdrive and distortion pedals in front of the Synth9 are not a good idea, and it’s also not designed to perform well in the effects loop of an amplifier. Bridge pickup at full volume is recommended as the input source, and that certainly works as the best option to hear the synth sounds as intended with their full sustain/decay envelope, but rolling back the volume knob does allow access to more staccato sounds.

Tracking is really good with a range that Digidesign says extends up to about the 23rd fret on the high E string of a standard guitar and down to the open A string on a bass guitar.

We tried playing below that on a bass and, while we did manage to trigger synthesized notes, the pitching was a little sketchy.  The pedal aims to cover several bases with the nine presets provided, certainly in the classic synths that are namechecked from Moog, Oberheim, Sequential Circuits, and so on.

The essence of those synths, though, is the availability of controls to create any sound you like, which isn’t something you can really build into a pedal of this nature, so what you actually get is a genre-typical set of sounds with a limited degree of adjustment, albeit with plenty to pique the interest and certainly enough to add a flavour of synth to your music.

The OBX preset offers a fat complex pad not unlike a huge church organ, while Profit V has a sharper attack and built-in filter sweep, and Mini Mood offers both a straight note and one with portamento, where it ramps up or down to pitch - these can be heard individually or blended.

For those who like to get funky, the EHX Mini preset offers nice filter sweep not unlike a Mutron pedal, while Mood Bass delivers a Moog bass pedal vibe. Solo Synth might appeal to fuzz fiends with its mix of square wave fuzz guitar and synth, and Vibe Synth features adjustable speed, rotary speaker-style modulation that works really well combined with dry sound.

The String Synth is based on the classic ARP Solina, with one knob controlling the top-end tone and the other adjusting the attack time so the sound swells in. It’s another sound that beds in nicely behind a guitar sound, offering a similar effect to some shimmer reverbs.

Overall, whether you want synth on its own or as a textural add-on for layering with your guitar sound, this pedal delivers it simply and cleanly, with blends to be explored that - when then sent through distortion and delay/reverb - can sound absolutely massive.

Like other ‘9’ series EHX pedals, this is a pretty specialised offering that’s not going to appeal to all and sundry, but it does its job really well and it may be a couple of hundred quid well spent if you find a mixed bag of synth tones appealing, either as a direct feature or as a tickle of interest underlying your guitar tone.