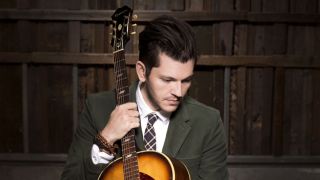 No quantizing, no grids for Ben Fields on his luminous debut album.

Singer-songwriter Ben Fields just wasn't made for these times - and perhaps that makes him the perfect artist for these times. Signed to Sire Records by the legendary Seymour Stein (the man who inked deals with The Ramones and Madonna, among others), Fields' debut album, Extraordinary Light, was cut on all-analog equipment at New York's The Maids Room studios on an eight-track console, and the resulting richness of sound - you literally feel the physical response from the instruments and the way they move air through the room - is as exhilarating and intimate as the album's deeply introspective songs.

"When you only have eight tracks to work with, you really want to make sure those parts serve the song," Fields says. "There were times when we would get to a point where the song wasn't finished and we had run out of tracks, so we would erase something and do it again. Instruments had to be played simultaneously through one mic at times. Backing vocals had to be sung into one mic. By today's standards, that kind of thing is completely unnecessary, but it makes you work harder. If I felt 'stuck' with our limitations, I'd remind myself that we had twice as many tracks as The Beatles, and they managed to make a few decent records."

When it came time to finish the album, Fields maintained his vision of an all-analog recording by taking his half-inch tapes to Los Angeles to work with the celebrated engineer Bernie Grundman, who mastered the recordings and cut to lacquer.

"I believe craftsmanship is far from dead," Fields says, "and though I do not craft shoes, or bookcases... I do craft something that I believe will not fall to pieces in weeks, or months, or years. I craft songs to last a lifetime. These songs are born of my desire to reflect and share my ever changing understanding of the truth."

In the above video, Fields and Grundman talk about the vinyl mastering process of Extraordinary Light. And below, you can check out the album's title track. Visit Amazon to purchase the vinyl edition of the record, which yes, is also available on CD and MP3 download.