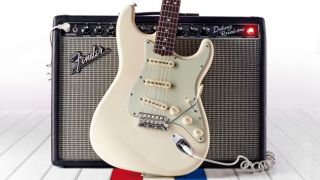 In shock industry news, the CMA has fined Fender Europe a total of £4.5 million for breaking competition law by preventing online discounting of its guitars.

The guitar manufacturer has admitted breaking competition law by "pursuing a policy aimed at restricting UK retailers from discounting their online prices" according to today's announcement from the UK government.

From 2013 to 2018, the CMA reports that Fender required its guitars to be sold at or above a minimum price. This is an illegal practice, also known as 'resale price maintenance'.

During the course of its investigation, the CMA found evidence that there were occasions when Fender "pressurised retailers to raise their online prices, after being tipped off that they were not toeing the line."

The CMA also found examples of Fender employees deliberately trying to cover up their actions "by recording as little as possible in writing".

The investigation cited emails and texts from Fender’s IT servers and mobile phones, which the CMA says helped to prove wrongdoing.

Fender's admittance  of guilt in this case comes under the CMA’s "leniency" and "settlement" procedures. In this situation, a company admits acting illegally and co-operates in return for a reduced fine.

With online sales of musical instruments now growing to to around 40% of the total £440 million and guitars being a significant part of that, the CMA highlighted the importance that "musicians have access to competitive prices online".

"It is absolutely essential that companies do not prevent people from being able to shop around to buy their products at the best possible price," says Andrea Coscelli, CMA Chief Executive. "This is especially important for expensive and popular items like guitars, and so Fender’s actions could have had a big impact on customers.

"Quite simply, this behaviour is against the law. The fact the CMA has imposed large fines on major musical instrument firms Casio and Fender in a matter of months should be a lesson to this industry and any other company considering illegal behaviour. Break competition law and you will face serious consequences."

The fine is the largest that has been imposed in the UK for resale price maintenance and follows Casio's £3.7 million fine for similar actions in the digital piano and keyboard market.