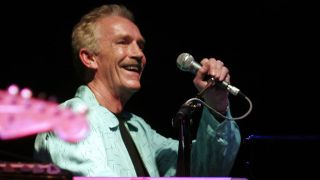 I started playing the organ in 1963 when I was a freshman in college. I had taken a couple of years of piano lessons when I was very young, but I didn’t care for them and started playing the drums in my early teens. I heard Jimmy Smith around 1962 and decided I wanted to play the organ. Hammond organ, that is, and so I became a B3 owner in 1964. I played pedals and left-hand bass for several years early on, which gave me a real appreciation for the Hammond and its incredible power, versatility, and soul.

I had some of my favourite drawbar settings hard-wired into the presets of one of my B3s for quicker tone changes when I was playing organ bass, which is pretty rare for me these days. I always have four drawbar settings in place and manipulate them on the fly, according to the dynamics and requirements of the song at hand. What I start out with is dictated by what the music calls for, but I seldom end a tune with the same organ settings I begin with. There is an infinite number of drawbar combinations available on the Hammond organ, but here are some of my favourites:

Ex. 1 is a modified Jimmy Smith-type sound using the second set of drawbars on the top manual of the organ. The drawbars are set to 888800000. The percussion is set at “4 up,” meaning percussion on, percussion volume on soft, decay set to fast, and the third harmonic on. The vibrato/chorus is on at the C3 setting, with the Leslie on chorale or slow. This combo produces a fat, edgy tone that’s good for soloing. This same setup without percussion yields a solid, semi-big, Rock/R&B comping sound.

Ex. 2 is an understated organ stop full of Hammond character. It works well for comping, as well as block chord soloing. Drawbars are set to 830000378. I seldom keep the Leslie on fast for long, but this sound is the exception, as the fast speed is part of its ‘simmer.’ Vibrato off, but you can set it to C3 if you want a little more edge.

Ex. 3 is a nice, round tone for comping behind singers or other soloists. Set the drawbars to 803600000. No vibrato and no percussion on this one. For this sound, as well as for most others I play, I change speeds on the Leslie often and quickly.Listen at: /Portals/2/Shoutin.mp3

Ex. 4 is a Gospel-tinged tone that will penetrate over a full band. Drawbars are set to 668848588, with no percussion, and vibrato off or set to C3 sometimes for variation. This stop works well for rhythm section comping, and will help get an organ solo over the top of the guitar player who has trouble locating his volume knob! I constantly alternate Leslie speeds when playing this sound.

Ex. 5 is a versatile sound that is good for both soloing and comping. Drawbars are set to 888000008. Vibrato is set to C3. I prefer the Leslie on fast for soloing, and on slow for comping when using this combination.

Keyboardist Mike Finnigan has played with such revered artists as Jimi Hendrix, Joe Cocker, Crosby, Stills & Nash, Rod Stewart, and most recently, Bonnie Raitt, with whom he's been touring with since 2012. He’s also sung and played with the Phantom Blues Band for the past 18 years.

“In addition to Jimmy Smith, I listened to all of the great organists when I was coming-up; Jimmy McGriff, Groove Holmes, Don Patterson, Jack McDuff, and many more. More importantly, I got to see them perform live, along with countless other wonderful organists in both clubs and in the Gospel church. Watching great organists play live will help your musical education immeasurably.”