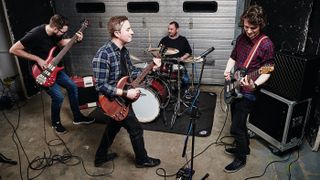 Getting your band in the same room to play can be like herding cats, but get it right and practice can be the key to success…

Whether you’re taking your first steps with a new band, or getting frustrated with an existing one, an important part of success can be measured by your practice sessions. How much are you getting done? Are things continuously going wrong? Even how fun your band practices are; it all plays a part and forms the root of your dynamic of how you play and communicate as a group of musicians.

Making changes doesn’t need to be about ruling with an iron fist and becoming a de facto band leader, it’s often just a case of changing habits in preparation and routine with everybody contributing their share.

Deciding what you want to get done in each practice session, how to break things down into realistic chunks and what realistic deadlines you’re working to. The latter could be a gig or recording session and the new songs or cover versions you need to nail for them.

How well you work with others is often about different personalities as much as musical styles and approaches. Success and failure can often depend on how you can adjust and organise as a band without causing unnecessary conflict. So with all that in mind we’ll talk through some fundamental steps that can help you get the most out of your practices and jams.

For your first practice, it’s easy to get carried away. But the more you try and cram into a session, the higher the risk of disappointment when you don’t get through it all. You need to make sure the first stages of any band are productive and fun. So it’s vital that you’re realistic; choose around three songs to focus on if you’re still finding your feet, and if you’re already up and running bring in one new one each time.

This will keep things fresh and move things forward, adding to your potential set list. But there’s a fine line here; if something gets tricky it’s tempting to move on to another song that you’re comfortable with rather than dealing with whatever is making it difficult. That’s where communication comes in…

One of the biggest misconceptions when bands first start practising with each other is that the work just happens in the room. Wrong; solo preparation makes a massive difference. And that’s why everyone must be on the same page; when and where is the practice, what are you going to focus on… even what key a song is in.

A practice should be a place where you learn to play songs together, not how to play them full stop. If you’re stood in a hired room learning a song from scratch, it’s not the best use of time. So if you can get comfortable with a new song or idea by the writer sending out a rough demo to the band beforehand, or everyone learning the song you’re covering before practice, it makes a massive difference.

Suggesting a song to learn on the hoof might work for some, but it isn’t the best way for most. Having a plan of action will reduce the risk of frustration later.

As a guitarist it’s easy to think of recording as something you do when you have a finished product. But even if it’s just on a smartphone, recording your practices can be useful for a few reasons. Firstly, it’s sometimes hard to get a handle on what the band sounds like from your perspective in the confines of a playing space.

Listening back to a recording allows you to hear the bigger picture of the composition. It will also help you to hone in on what is going right and wrong. And this is where you need to be tactful as well as supportive; if someone is playing the wrong note or going into a section too early, try and communicate that in a helpful way, i.e. without saying ‘you’re messing up’.

We all mishear and make mistakes. Likewise, if someone is really contributing to the success of a song with their approach to a part - tell them. Praise is something we all want as musicians, but it sometimes gets lost in band interactions. Positive feedback can be hugely rewarding and important for members to feel like they’re contributing and valued by their bandmates.

It’s easy to overlook the importance of agreeing on the logistics when it comes to practices, but getting a group of people to commit to being in a room for a few hours in their valuable spare time can make or break bands before they’ve even had the chance to form some chemistry together.

After each practice session, try and commit to organising the next one and book it . Block book as much as you can (especially useful if you’re hiring a popular practice space) so you have a commitment and everyone knows where they stand.

We’d recommend setting up a group online for instant messaging too so you can discuss arrangements and suggestions between practices. It helps everyone feel part of the band, rather than a couple of people passing information sporadically that could result in people getting the wrong end of the stick when it comes to arrangements.

How to play with other musicians: 5 essential tips

There’s a few things we have experienced time and time again in band practices with the way musicians interact; some are great, and some are not. Firstly, timeliness. We don’t want to sound like your boss at work here but if someone in the band keeps turning up half an hour late, it holds up every member of the band for that time. And they certainly can’t complain if the band just starts without them, leaving them trailing behind.

Taking regular breaks is also important - nobody wants to break the creative flow if you’re on to something good but a rest for water and food is always important.

The other common gripe in the practice space can be playing over people when they’re trying to tune or talk to each other. We’re not just looking at drummers, guitarists can be equally as guilty for this. We all love to play but be aware of what’s going on around you.

Lastly, we need to talk money. Split the cost of hiring practice or recording space and don’t be the one who ‘forgets their wallet’. Little things can sow seeds of discontent in the longer term and the band that plays together should pay together.