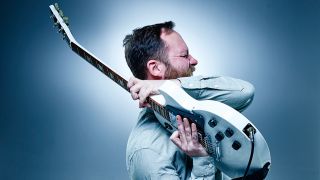 30-day guitar challenge: Start your journey to improving your solos with some essential blues basics...

This is usually the first scale shape learned by aspiring lead guitarists. It’s also a core part of the styles of players such as Chuck Berry, Jimmy Page, Slash and many more. Start on a G note, as shown here, and you’ll be playing G minor pentatonic; start on A and it’s A minor pentatonic, and so on for other key signatures.

Also known as a ‘mode’, the A Mixolydian scale is just like the A major scale (A B C# D E F# G#) but featuring a b7th. That means the seventh note is a semitone lower than in the major scale - so instead of G# you play G natural. It sounds less bright than the major scale - perfect for bluesy noodling over powerchords and ‘dominant’ chord progressions (A7, D7 etc).

If there is a technique that will immediately give your lead playing some blues and rock authenticity, this is it! There simply isn’t a blues player out there who doesn’t use this device all the time. Often, it is the second note of the minor pentatonic scale (aka the minor 3rd) that is pulled or pushed slightly sharp, blurring the lines between major and minor moods.

The two-fret bend is another almost universal technique that can take a while to master. As a general rule, most players push up on the three treble strings and pull down on the fourth, fifth and sixth strings, so you don’t end up pushing/pulling off the edge of the fretboard. Bracing two or three fingers together can really help with strength and accuracy.

Another way of manipulating pitch, vibrato can be slow and shallow, fast and wide, or a combination of these. Stevie Ray Vaughan used a medium speed wide vibrato; Paul Kossoff and Angus Young combine speed and depth for a striking effect. Eric Clapton and BB King lift the thumb away from the back of the neck, allowing the fretting hand to rock to and fro.

Blues you can use

This Eric Clapton style line is derived from the G minor pentatonic scale, using quarter tone and whole tone bends with a thick overdriven tone. Notice how the lick can be repeated over the I and IV chords of a I-IV-V blues chord progression; that’s G-C-D in the key of G.

Mix of rock and blues

This Free and AC/DC inspired lick is played using the A Mixolydian scale (A B C# D E F# G). Try swapping the 6th fret C# note in bar 1 for a 5th fret C and you’ll be in the noticeably moodier A minor pentatonic scale (A C D E G). It’s a one-note change which you can easily exploit in your own blues jams.